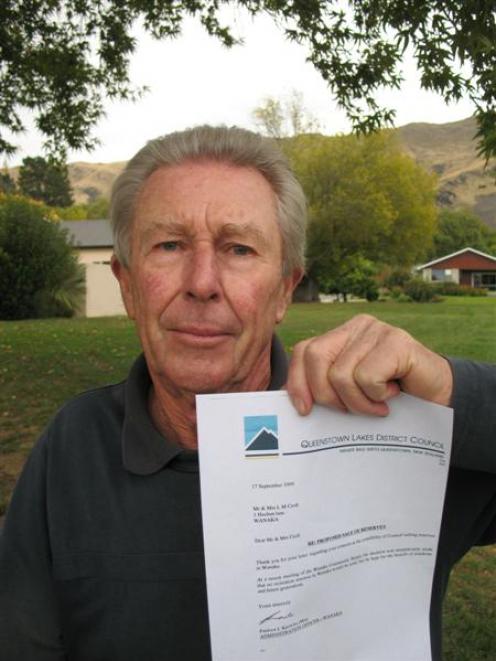 At their meeting in Wanaka today, councillors will be asked to sign off the sale of $23,240,000 of council property that staff consider surplus.

One of those properties is a ''scenic reserve'' in Sargood Drive, Wanaka, which is part of the Ripponlea subdivision developed by the late Rolf Mills.

Mr Croft was one of the first to build in the subdivision in the late 1970s and has a thorough knowledge of the history of the 0.103ha scenic reserve - having owned a section next door and now living across the street.

Mr Croft told the Otago Daily Times yesterday the council tried to sell the land in the late '90s but ''backed off'' in the face of public opposition.

He was the organiser of a petition to keep the land - given by Mr Mills to the council as a ''reserves contribution'' - in council ownership.

And, when he and his late wife Ruth received a letter from the council in September 1999, they thought the matter was finally settled.

The letter, signed by a council administration officer, says in part: ''At a recent meeting of the Wanaka Community Board, the decision was unanimously made that no recreation reserves in Wanaka would be sold, but be kept for the benefit of residents and future generations.''

Mr Croft believes a staff member without a knowledge of the scenic reserve's history has made the recommendation to sell it and he believes the title should specify the land is not available to be sold by the council.

He intends to draw the council's attention to the letter during the public open forum at today's meeting.

In a response to the ODT yesterday, general manager regulatory and corporate Roger Taylor said the council could sell the land ''regardless of any prior decision, although they may not necessarily decide to do so at the meeting''.

''Should the elected members decide to sell that particular parcel, its scenic reserve status means the reserve classification and status must be uplifted. This will be a public process with public input.

''It's important to note that any revenue derived will be reapplied to the acquisition of other reserve land.''