Top brass on the ground 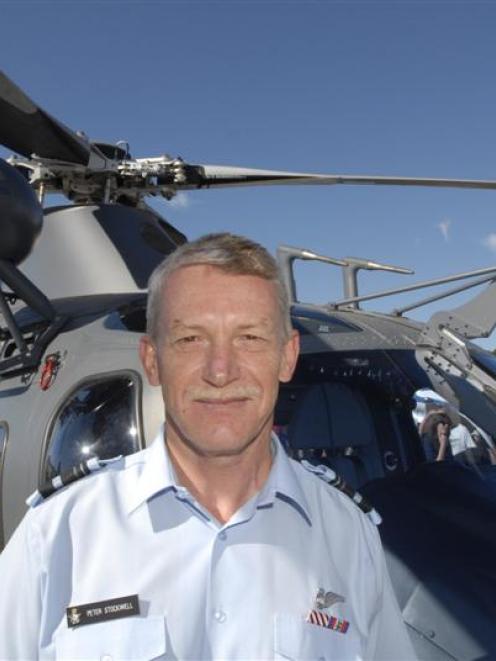 Royal New Zealand Air Force Air Vice-marshal Peter Stockwell, of Wellington, in front of an Italian-manufactured Agusta Westland A109 light utility helicopter, at Warbirds Over Wanaka on Saturday. Photo by Gregor Richardson
The Royal New Zealand Air Force has been no stranger to Warbirds Over Wanaka International Air Show since the show's inception in 1988.

But this year's celebration of 75 years of service to Queen and country drew some of the top brass to Wanaka for the first time, including New Zealand's Air Vice-marshal Peter Stockwell, of Wellington, and the commander of the US Pacific Air Force, General Gary North, who both attended on Saturday.

Air V-m Stockwell said, in an interview with the Otago Daily Times, he had been unavailable during previous Wanaka air shows but had been looking forward to coming for quite some time.

"It has so much variety and I think it is unique, not just for New Zealand but for the world because you typically wouldn't see such a range of aircraft," he said.

The New Zealand air force attended at least one air show every two years, typically at Wanaka and Wairarapa - but this year it also hosted its own 75th anniversary event at Ohakea and performed Red Checkers displays around the country.

Over the past 75 years, the appeal of adventure, overseas travel, trades training, and working for a professional organisation appeared not to have waned for teenagers, although clearly 18-year-olds would not now be put into a combat situation after a short period of training, he said.

The aim now was to graduate 16 pilots a year. Pilots made up about 7% of New Zealand's air force personnel and there were two intakes of between 20-24 pilots each year.

The high training standards meant there was a fairly high attrition rate.

"It is a lot more structured and professional, even since I did it [training]. If you go back to the war years, they needed to get pilots in planes quickly and were putting kids out there with virtually no experience. That's why they tended to lose a few in training accidents."

During World War 2, the British Commonwealth Air Training Plan was introduced to prevent the high number of training deaths experienced in many countries, including Canada and the UK.

Of the 131,000 air force personnel sent to Canada for training, about 5% were New Zealanders.

It cost about $1 million to train a single air force pilot, taking into account everything from instructors salaries, infrastructure costs and other costs, he said.

That compared with about US$1 million to train a single pilot in the United States.

"We have learned to do things better. We also learn off other militaries, take lessons from each other . . . the standards are pretty similar," he said.

As chief of the air force, his role was not just desk based, Air V-m Stockwell said. He enjoyed getting outside and visiting bases, and also travelled overseas building relationships with other military forces.

The air force continued to offer a wide range of appealing trades and careers and new recruits could still expect to find excitement and adventure and be deployed overseas, he said.