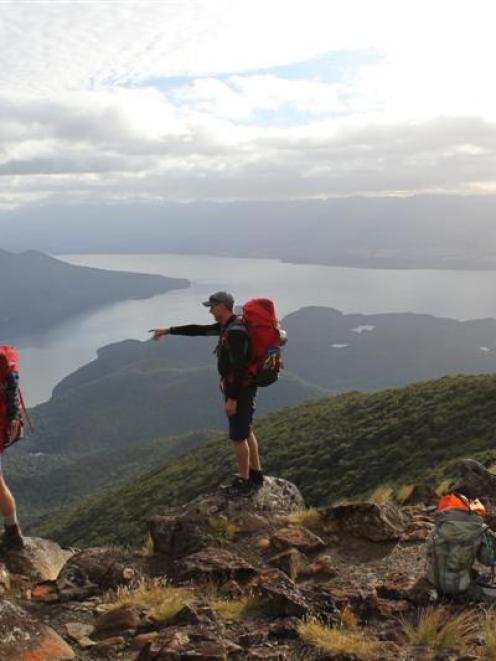 Taking in the vast landscape of the Kepler Track Great Walk - one of the nine being hiked back to back by Tauranga man Brandon Stone to promote the protection of Antarctica's Ross Sea - are (from left), tramping companion Keith Gregor and Mr Stone. Photo supplied.
Brandon Stone's 32-day tramping mission throughout New Zealand to promote the protection of the Antarctic's Ross Sea is no walk in the park.

Rather, it is a 750-plus-km adventure trek on the country's nine "Great Walks", starting with the Rakiura on Stewart Island and finishing with the Waikaremoana loop, southwest of Gisborne.

The Tauranga-based man on Wednesday morning emerged from the Routeburn Track, near Glenorchy, after completing not only that Great Walk, but sections of the nearby Greenstone and Caples tracks.

After starting on February 21 with the Rakiura and going straight on to Fiordland's Kepler and Milford walks, he said his fitness had already improved markedly.

"We don't have to rush, but we're getting up quite early in the morning, putting the time in and not getting in until 8.30 at night," Mr Stone said.

"I think it's quite an achievable goal, but in saying that, the people I've been walking with have ended up with blisters and aches and pains, so I'm feeling fitter as I go."

During his brief stopover in Queenstown, Mr Stone - feeling fine despite having already completed six trails - was looking forward to tackling the rest of his mission.

"This afternoon I'm flying up for the start of the Heaphy tomorrow morning, then taking a small plane to fly to Takaka, doing the Abel Tasman, ferrying across to Wellington and then off to Whanganui for a 145km paddle down the river."

The 41km Tongariro loop and the 46km track around Lake Waikaremoana are last on his tour, which so far has raised almost $3000 for the Last Ocean Charitable Trust.

"It's a New Zealand organisation with the goal of creating a Marine Protection Area for the Ross Sea ..and creating awareness to keep protecting what's already pristine".

Mr Stone got behind the cause as owner of On the Wildside - a business that takes people to Vava'u, Tonga, to swim with humpback whales, which migrate to the feeding grounds of the Ross Sea.

"Obviously, whaling is one aspect of the issue down there but there's harvesting of krill - which are crucial to the species down there - and other environmental issues like oil spills."

He thought his adventure was probably "achievable to most people" and said, along with other tramping partners, his 75-year-old father Chris had joined him on most of the trails.

Mr Stone aims to raise $10,000 and people can follow his journey or donate at www.onthewildside.co.nz