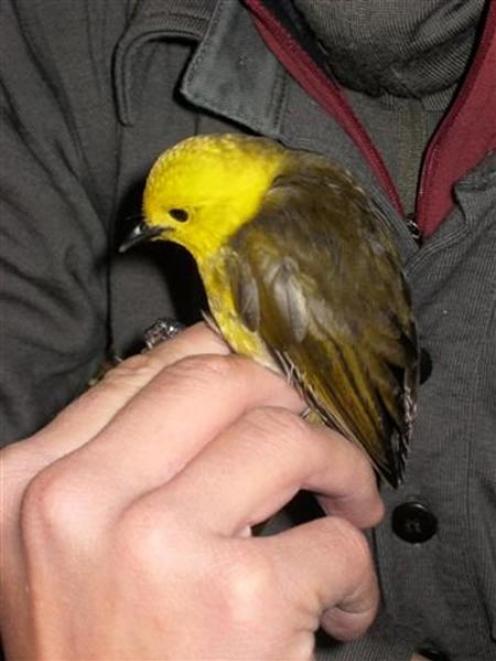 Mohua are classified as nationally endangered. Photo by DOC
The Mohua Charitable Trust has donated $11,000 to a Wanaka-based programme to save the mohua, a rare native bird, in the Mt Aspiring National Park.

The mohua are classified as nationally endangered and live in dense beech forest in the Makarora Valley, where they are protected by a predator trapping programme aimed primarily at catching stoats.

Department of Conservation Wanaka office biodiversity ranger Flo Gaud said in a media release this week the donation was a welcome boost to the project, which is in partnership with the Central Otago-Lakes branch of the Forest and Bird Protection Society.

A survey in November resulted in 34 mohua sightings.

Trust founder and treasurer Nigel Babbage said the donation should enable the purchase of 200 new predator traps to replace outdated ones.

"A millennium ago, when the South Island was one big beech forest, the mohua were the predominant insectivore in the forest," he said.

The project was a "starting point" for the trust and Doc to work together to protect not just mohua but all indigenous wildlife from predators, Mr Babbage said.

The project now has 300 predator traps from Makarora through to Haast Pass and into the Young Valley.

While stoats were the primary target, the conservation management focus had widened to include rats, Ms Gaud said.

While Makarora had been fortunate not to have suffered rat plagues this severe, a rat control programme was being developed for the area, Ms Gaud said.

The yellow-headed and yellow-breasted birds are found only in the South Island beech (tawhai) forests.

Through habitat loss and predation they are now only found in 20% of their former range.

Mohua nest in holes in trees, making them vulnerable to stoats and rats, but they have a high reproductive rate, laying four eggs per brood.

The bird is depicted on New Zealand's $100 note.