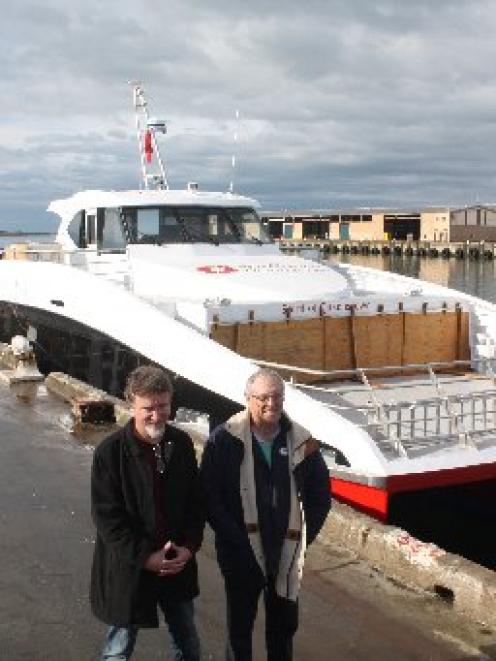 Foreign-going master Brooke Hidderdine has no doubts she will be up to the job, after guiding her through an often-rough maiden voyage from Brisbane to Bluff.

The 26m, twin-engined vessel encountered 4m swells and strong winds on the third day of the transtasman crossing, he said.

''She's had a baptism of fire, but I'm very happy with the way she performed. She is an extra-safe vessel,'' he said.

Spirit of Queenstown was built in Brisbane by Aluminium Marine Pty Ltd. Mr Hidderdine, engineer Steve Lovelace and six other crew were hired to trial her at sea and bring her to New Zealand.

''We made landfall in three days, which is pretty good. At times she was doing up to 20 knots. That's a good speed.''

Over the next few days the wheelhouse will be removed ready for the boat and wheelhouse to be transported to Kingston by road next Tuesday and Wednesday.

Southern Discoveries founder Sir Clifford Skeggs, whose sons now own the business, was at Bluff to watch Spirit of Queenstown berth.

He has owned fishing and tourist boats for 60 years and said the catamaran, which he said cost about $4 million, was ''exceptionally well built''.

Spirit of Queenstown will be moored at O'Regans Wharf and will operate trips carrying up to 150 passengers to Mt Nicholas Station.

Sir Clifford said she would serve a similar market as the steamer Earnslaw.

''Building a new vessel is a big investment - a great risk - but we hope it will be a successful investment. It will give tourists the option of the latest versus historic.''