Warbirds, wheels to fascinate all 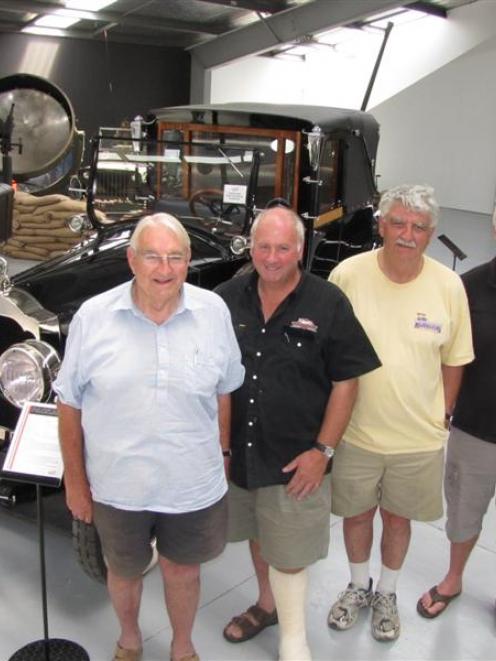 Wanaka Airport's new Warbirds and Wheels visitor attraction opens today. It will be managed by private classic car collectors (from left) George Wallis, Robert Duncan and Garth Hogan, of Wanaka, and Phil Dunstan, of Queenstown, and will feature rare classic cars such as this 1918 Packard semi-collapsible Landaulet Fleetwood model. Photo by Lucy Ibbotson.
After many months of preparation, the Warbirds and Wheels attraction at Wanaka Airport will open its doors to the public for the first time today.

The attraction is located in a purpose-built hangar opposite the Wanaka airport terminal and has been developed by the Warbirds Over Wanaka Community Trust during the past year to replace the former New Zealand Fighter Pilots Museum.

It will be managed by Classic Consortium Ltd, comprised of private car collectors Robert Duncan, George Wallis and Garth Hogan, of Wanaka, and Phil Dunstan, of Queenstown.

The attraction showcases a collection of Warbirds, rare classic cars, military equipment, a vehicle restoration shop, a 1930s petrol station, New Zealand artworks and a display on Wanaka aviation entrepreneur and Warbirds Over Wanaka founder Sir Tim Wallis. One of the first Hiller helicopters Sir Tim used in deer recovery is suspended from the hangar's roof.

There is also a gift shop and a 1950s-themed diner, which opened earlier this month.

Warbirds aircraft on display include an RNZAF Skyhawk fighter jet, Strikemaster, Vampire, WW1 SE5A and the only flying Hurricane in New Zealand.

Mr Duncan said the debut car display theme was Packards - "the ultimate American car" - including a rare 1918 Packard semi-collapsible Landaulet Fleetwood model from New York, one of only two produced.

"Those vehicles in there are probably the pick of classic cars in New Zealand," he said.

Mr Wallis said it was fantastic to finally welcome the public into a "world-class" attraction, which would "fascinate all ages and interests with its broad collections of aircrafts, vehicles, artworks and early Wanaka history".

The classic car display will be changed twice a year, and exhibitions in the visual arts gallery will also be updated regularly.

"We don't want to use the term museum because it always seems like museums are places where things go to die ... we want to keep it alive," Mr Duncan said.

The attraction will be open 9am-5pm daily. Admission costs are adults $20, children $5 and family $45. A locals' card will also be available.

A grand opening is planned for late January.