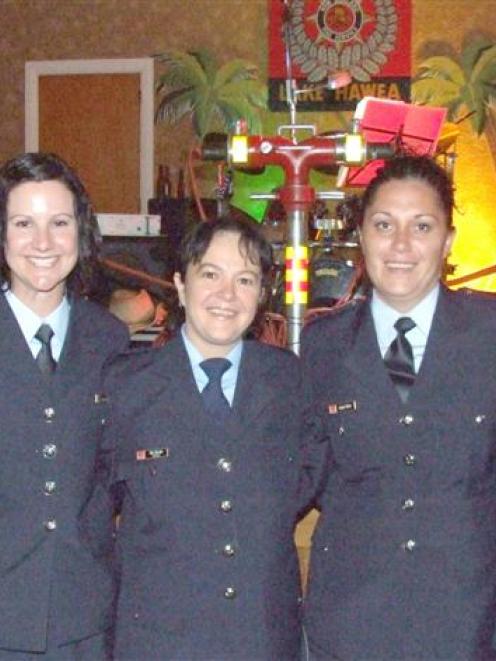 Amber Hollis, Jacqui Read, Tina Gillies, Aubrey Dixon, and Liz Matheson are female firefighters who volunteer with Upper Clutha fire brigades. Photo by Matthew Haggart.
What do a brewery sales rep, a school teacher, a stay-at-home mum, a cafe owner, and a businesswoman have in common?

The five are all members of Upper Clutha fire brigades, and at the forefront of the changing face of firefighting.

About 100 people gathered at the Hawea Flat hall on Saturday night for the annual Upper Clutha fire brigades awards ceremony to recognise the commitment made by the region's volunteer firefighters.

Mrs Dixon said she joined the service as a volunteer, because, since moving to Wanaka 12 years ago, the fire brigade had always been part of her life.

"It does sound a bit corny, but I really did want to be someone who is able to give back to the community," she said.

New recruit Amber Hollis said her decision to join the Lake Hawea brigade was influenced by an accident when firefighters came to her rescue a decade ago.

The 27-year-old was cut from the wreckage of her car by firefighters, after she crashed her vehicle down a 40m bank near Mosgiel.

"After that [incident] I've always wanted to be a part of the service and be one of those people who are there to help others," she said.

The Luggate and Lake Hawea brigades needed new recruits, while the Wanaka brigade had a waiting list, he said.