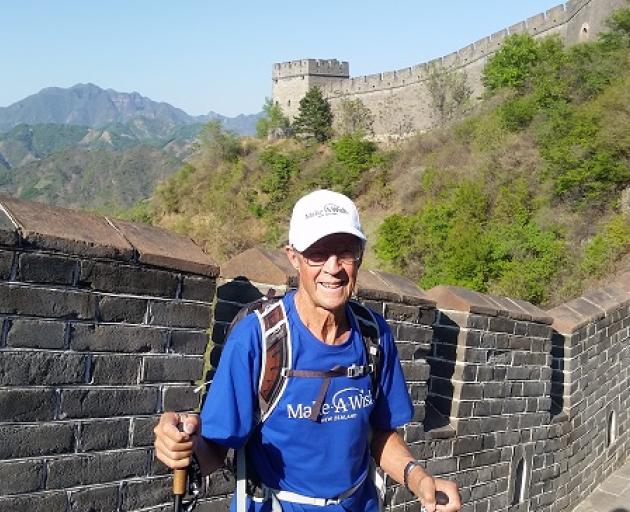 Kerry Dunlop is walking the Great Wall of China for charity. Photo: Supplied
A Queenstown pensioner’s proving no wall is too high when it comes to helping dreams come true for sick children.

On Monday, Kerry Dunlop set out with 11 other adventurers to trek part of the Great Wall of China, over five days, to raise money for Make-A-Wish New Zealand.

Trekking the longest wall in the world is no easy feat. It zig zags for more than 21,196 kilometres over mountains and valleys, and the path is crumbling in places.

The 78-year-old’s been tackling long hikes four to five times a week in preparation for the trip to China, including the Ben Lomond Track.

Dunlop, who lives in Quail Rise, was inspired to lace up his boots to raise money after hearing from his daughter – who works at Make-A-Wish – about the wonderful experiences the charity organises for children with critical illnesses.

Some people walking alongside Dunlop are parents of children who have been granted a wish before.

“For example, a little girl wanted to go in a hot air balloon so the charity made it happen, and I just thought what a lifetime experience for her.”

Feeling lucky to be fit for his age, Dunlop was compelled to get moving to ensure more wishes could be granted.

He’s invested in walking poles to help power through six-hour walks on some days, as well as steep stairs and a rocky path.

“I have enjoyed the use of walking poles; they make a difference on hills and give you stability you wouldn’t otherwise have.”

So far, Dunlop has collected $4000 in donations, but he would like to raise more for the charity.

“It’s so worthwhile doing something for other people.”