After being caught in avalanche, duo spend night in snow cave

By Cass Marrett
0 Comments
Two climbers rescued from Double Cone in the Remarkables mountain range were in "good spirits" on initial contact, despite getting caught in an avalanche and spending the night in an ice cave.

"Physically and mentally they were pretty good shape, a little damp as you would be — they’d been out three nights previously, camping," Alpine Cliff Rescue team co-ordinator Russell Tilsley said.

The climbers, in their early 20s, were experienced and well-equipped for a night in a snow cave.

They had been on a climbing trip since last Saturday and had initially gone up through the Remarkables skifield and down into the ice falls at the head of the Wye Valley.

On Monday, they decided to come back up and go around to the south face of the Remarkables, where they camped for the night.

"That was when the snow really came in," Mr Tilsley said.

"They were in a tent and the tent was pretty much just about completely buried the next morning and that’s when they sort of realised, ‘well, we better try and walk out’."

But as they set out on Tuesday morning, they triggered an avalanche which Mr Tilsley said was big enough to collect some rocks on its way down.

"If they’d probably been maybe another 20m or 30m along that slope, they could have been quite easily buried by the avalanche instead of just being taken for a short 20m ride on the side," he said.

The climbers were able to extricate themselves, uninjured, and moved to a "relatively safe" area nearby.

They called 111 on a cellphone, "which was a great decision for them to make", Mr Tilsley said. 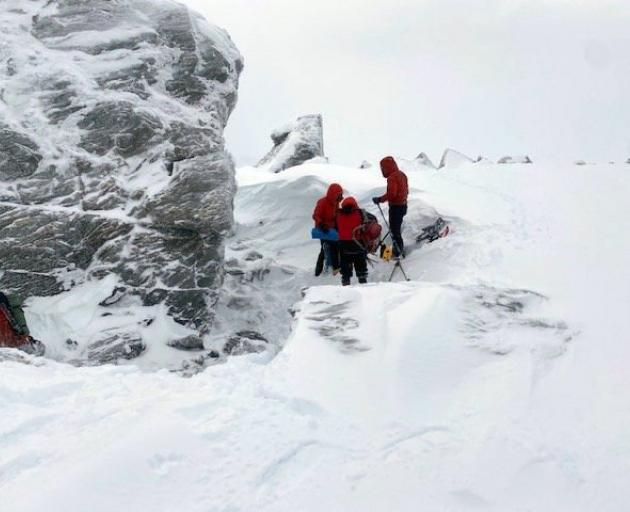 The rescue team tried twice on Tuesday afternoon to reach the pair but could not because of the weather.

"We’d had communication with these guys, and they were quite happy to spend another night out," Mr Tilsley said.

The pair were advised to dig out a snow cave and were equipped with shovels to do so, and also had food.

The next morning the weather was unfavourable again, but the rescue helicopter was able to drop a crew of three 1.2km from the climbers and about 350 vertical metres below them.

"The boys managed to finally get up to those guys just before midday ... [and] just after that we got a little clearance and little hole appeared in the cloud.

"It was a very quick pick-up — we went and grabbed them quickly before the weather came in again."

Mr Tilsley said the safety message was knowing when to call for help.

"They made the right decision ... They had a lot of the right equipment, but instead of carrying on — and they probably would have gotten themselves into more danger — they pulled back.

"[It’s about] not being afraid to make that decision, to ask for help."