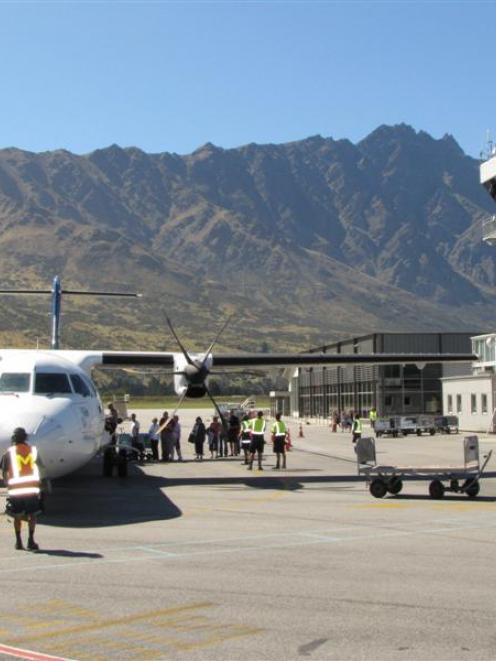 Queenstown Airport has been in the news since the middle of last year. Photo from <i>ODT</i> files.
It has taken nine months, but the controversial strategic alliance between Queenstown Airport Corporation and Auckland International Airport Ltd will finally be aired in the High Court at Queenstown this month.

The judicial review will begin on May 16. It has been brought by members of the Queenstown Community Strategic Asset Group and Air New Zealand against Queenstown Airport Corporation and its directors, including ousted former chairman Mark Taylor, Auckland International Airport Ltd and the Queenstown Lakes District Council.

It will look into an alliance in which Queenstown Airport created and sold 24.99% new shareholding to Auckland Airport for $27.7 million, in a deal publicly announced to Queenstown Airport's shareholders - the community - after it had been done.

The matter has been set down for five days and, for those who have been following the story for the past nine months, it may provide some answers.

The judicial review will examine the lawfulness of the transaction which led to the strategic alliance. If it is found to be ultra vires, or outside the law, the High Court judge has the discretion to consider what remedies may be appropriate.

That includes unwinding the transaction.

Counsel Allie Cunninghame, of Anderson Lloyd in Dunedin, said it was expected the decision in the matter would be reserved by the judge, but a written decision was likely to be issued "reasonably quickly".

"Usually, they like to issue them [judicial review decisions] reasonably swiftly, but it really can be up to the judge."

Even when the decision is issued, it does not necessarily mean the end of the legal battle, with any decision issued by the High Court able to be appealed to the Court of Appeal.

The story has been dominating headlines in the Otago Daily Times since last July, the most recent of which was the appointment this week of Dunedin-based Murray Valentine as the interim chairman for the Queenstown Airport Corporation board, after Mark Taylor announced his forced resignation on April 13.

The council passed a resolution at an extraordinary meeting on April 8 to remove Mr Taylor from the board if he did not agree to resign within seven days.

A permanent replacement for Mr Taylor is not expected to be appointed until the end of September.

The Queenstown Airport issue has divided the community and resulted in the creation of the self-appointed Queenstown Community Strategic Asset Group and the expensive High Court process, which has cost the council more than $400,000 so far; and it all began with a surprise press conference held at Queenstown Airport on July 8.

Local media were briefed by QAC chief executive Steve Sanderson, Mr Taylor, Auckland International Airport Ltd chief executive Simon Moutter, chairman Tony Frankham and then-mayor Clive Geddes on the transaction and the second tranche option, where Auckland could increase its interests to between 30% and 35% before June 30, 2011.

Councillors were briefed on the alliance the day before, during a workshop.

At the time, Mr Geddes was quoted in the ODT saying QAC would pay the council a special $10 million dividend up front "in a matter of days or weeks", with an estimated ongoing annual dividend of at least $2 million to follow.

The following week we reported the $10 million would not be paid to the council until Auckland Airport increased its shareholding.

Cr Vanessa van Uden, former mayor Warren Cooper, Air New Zealand and the Queenstown Chamber of Commerce were all critical of the increasingly contentious issue, with the chamber preparing a report for its members looking into the alliance.

On July 16, the chamber released its seven-page memorandum, raising several issues and releasing two recommendations. The first was to take no further action with issuing more shares; the second to investigate whether there had been a breach of QAC's responsibilities under its statement of intent.

In response to questions from the Queenstown Times, Strategic Asset Group spokesman John Martin said in a "categorical statement" he had no financial interest in Queenstown Airport, a statement Mr Taylor later disputed.

Councillors later met for more than three and a-half hours at a workshop, attended by Mr Geddes, QAC representatives and legal advisers to discuss the share issue, while QAC issued a statement calling for chamber president Alastair Porter to stand aside from the debate, citing a conflict of interest.

On July 29, the chamber lodged Official Information Act requests with the council and QAC seeking the "facts" of the alliance; requests which were later declined.

By August the matter had been brought to the attention of the Office of the Auditor-general, but on August 18 it announced the planned investigation was on hold because of High Court action.

Applications were filed by the Strategic Asset Group and Air New Zealand in the High Court at Invercargill on August 17, seeking an injunction and a judicial review.

In September, the council promised the High Court at Christchurch no final decision would be made with respect to the second tranche shareholding, or entering into a shareholders' agreement, while the matter was before the court.

On November 16 the ODT reported the council had spent more than $120,000 in legal fees and litigation costs, with Simpson Grierson, of Wellington, acting on the council's behalf. A month later the cost had grown to $183,000 and by the end of December it had reached $320,000.

The costs have continued to rise, escalating to $401,065 by March 31, that figure expected to grow exponentially in light of the scheduled five-day hearing next month.

The long-awaited PriceWaterhouse Coopers report into the fairness of the transaction was commissioned in December, with an aim of having it released in late January.

The report was initially delayed to February and then delayed further after the February 22 Christchurch earthquake.

On the eve of the 72-page report being released, both airport companies announced the second tranche shareholding had been "cancelled", before Auckland Airport told the ODT it had made no secret of its desire to increase its shareholding and might, in the future, approach the council to do so.

The decision to cancel meant none of the special $10 million dividend would be received by the council.

Despite the announcement, parties forged ahead with the High Court battle, even though the ODT understands attempts were made to strike a deal.

Sources have told the ODT a possible deal was being brokered by the strategic asset group, the council, Air New Zealand and both airport companies, which involved the resignations of Mr Taylor and Mr Valentine from the QAC board; the cancellation of the subscription agreement by which Auckland could increase its shareholding and legal bills for all parties being paid by Auckland Airport.

In return, the High Court action would be abandoned.

However, Air New Zealand and the strategic asset group have forged ahead.

Many eyes will be watching next month's hearing closely, keen to see where the law sits on the matter, and wondering if it will signal the end of the controversy.

"It might be legally right, but morally, as the sole shareholder, we should have been advised."
- Then mayoral aspirant Vanessa van Uden, July 9, 2010

"The [QAC] board, I believe, has acted in the best interests of the community and shareholders ... by the power of their constitution."
- Former mayor Clive Geddes, July 9, 2010

"AIAL has displayed significant greed over several years and it would be naive to think that it is not aiming to see an increase in airline charges and airport charges, which could ultimately push up the cost of travel into and out of Queenstown and constrain tourism growth."
- Air New Zealand Australasia Group manager Bruce Parton, July 14, 2010

"Some councillors feel they should have been involved in the process earlier ... From the councillors' point of view ... they have had to defend it when they weren't responsible for it, and that's not a great place to be."
- Auckland Airport communications adviser Andrew Pirie, July 15, 2010

"I have some sympathy for [the] criticisms and their position to have found out at the end of the day. I can understand they didn't find that ideal. However, the board only had two options ... I think we made a good decision. I think it will be good for Queenstown and we'll see a lot of positive developments."
- Former Queenstown Airport Corporation board chairman Mark Taylor, July 14, 2010

"I think it's very important if you've got a grievance against a stupid decision that you just don't ruminate on it on your own; that you do something about it."
- Former mayor Warren Cooper, July 16, 2010

"I was surprised by the deal [and] I was surprised by the process that was used, but I accepted the reasons given by the airport corporation people and once I got over that surprise and thought it through, I came to realise that it was a very positive move."
- Former mayor Clive Geddes, July 16, 2010

"I know this is polarising people, but open debate and concern is healthy in a community. That is democracy stirred into action. That is good. We are here to talk openly and to be constructive. We don't hide. Bad things happen in the dark, so let the light in."
- Queenstown Community Strategic Asset Group spokesman JohnMartin, July 23, 2010

"We had 100% of an airport we locals built with a blue-sky future that is now shrouded by a dark cloud. We're mystified as to why any part would ever be sold, let alone in secret and to Auckland Airport. Council finds itself in a forced marriage with Auckland Airport. We are in court. Our town has become a battleground."
- Strategic Asset Group member Ken Matthews, December 4, 2010

"It's hard when you're making a budget for this type of expenditure - we base it on what we have spent previously ... We have not budgeted for anything of this [nature]."
- QLDC finance manager Stewart Burns, February 17, 2010