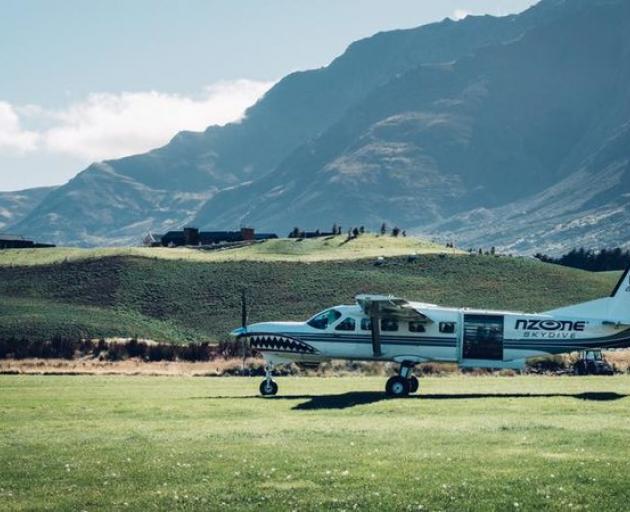 NZONE says it has a "zero-tolerance alcohol policy" Photo: Facebook: NZOne Skydive Queenstown
A skydiving company in Queenstown has sacked a member of staff after an alcohol-related incident.

NZONE Skydive Queenstown general manager Clark Scott said the company had a "zero-tolerance alcohol policy of which all staff are aware” and the dismissal followed "an incident involving alcohol’ on March 19.

He said the company routinely carried out "random breath testing”.

"There are breathalysers available for all staff to use at our sites if they wish to self-monitor."

Mr Scott wouldn’t be drawn on whether it involved a skydive and a paying customer.

"We have no further comment, as this is now with the Civil Aviation Authority”.

NZONE said it reported the incident and the action taken to the aviation watchdog immediately, as per its "stringent health and safety procedure".

The CAA’s manager special flight operation and recreational aviation, Jonathan Mayne, said he was happy with the skydive company’s explanation, but the authority would be "looking into what action can be taken”.

He said lockdown prevented any "immediate risk to public safety” as the company was not currently operating, but the Covid-19 restrictions also limited opportunity to investigate.

Mr Mayne said more detail could not be given during an investigation.

CAA Alcohol Consumption and Medical Aviation Safety guidance indicated there was "no measurable level of blood-alcohol that is safe for aviation” as it could affect performance.

It also warned of post-alcohol effects, such as a "hangover”.

NZONE offers tandem skydiving in the resort and has been operating since 1990.

According to its website it employs about 65 staff and has taken more than 300,000 passengers tandem skydiving.