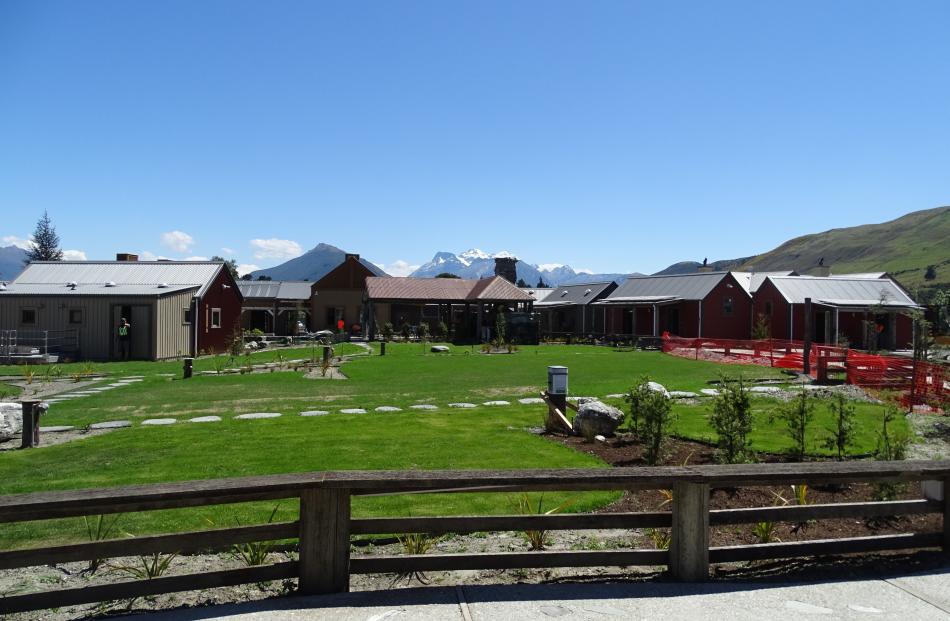 The Camp Glenorchy tent site, with cabins to the left, the main reception, amenities and ablution block ahead, and camper van sites to the right. Photo: Tracey Roxburgh 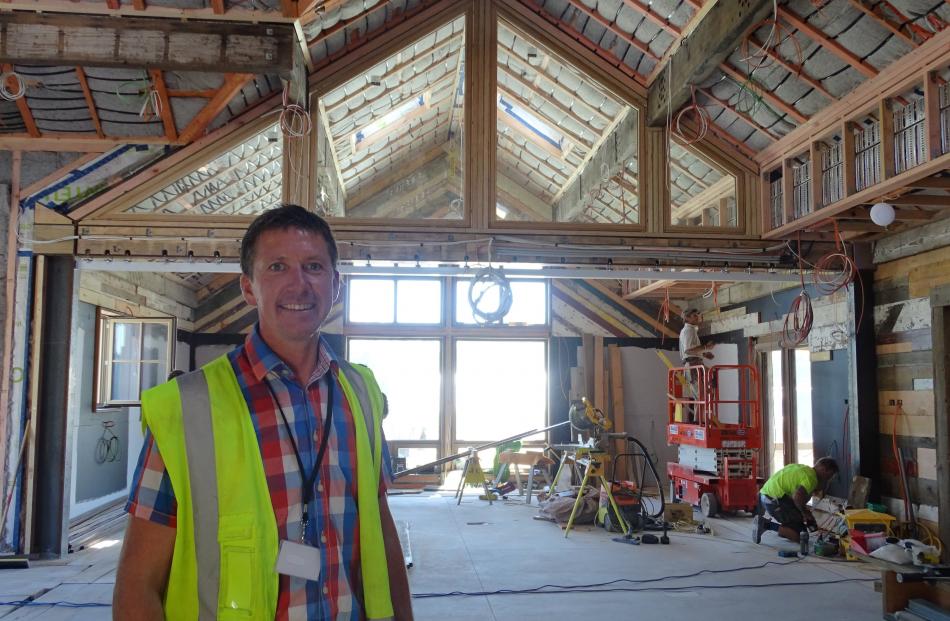 Camp Glenorchy project manager Steve Hewland inside the site’s events space, which can be split up and features a dual laser projector to cater for the conference and events market. 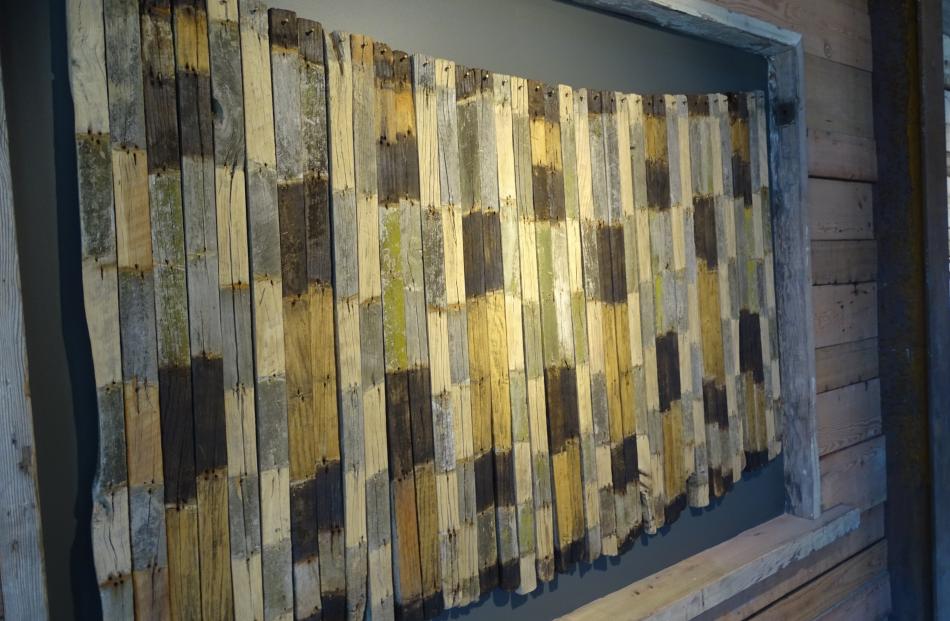 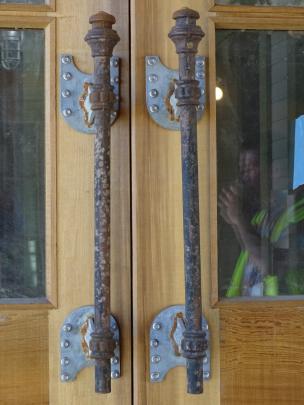 Dan Kelly-designed touches, including these door handles, are everywhere at Camp Glenorchy. 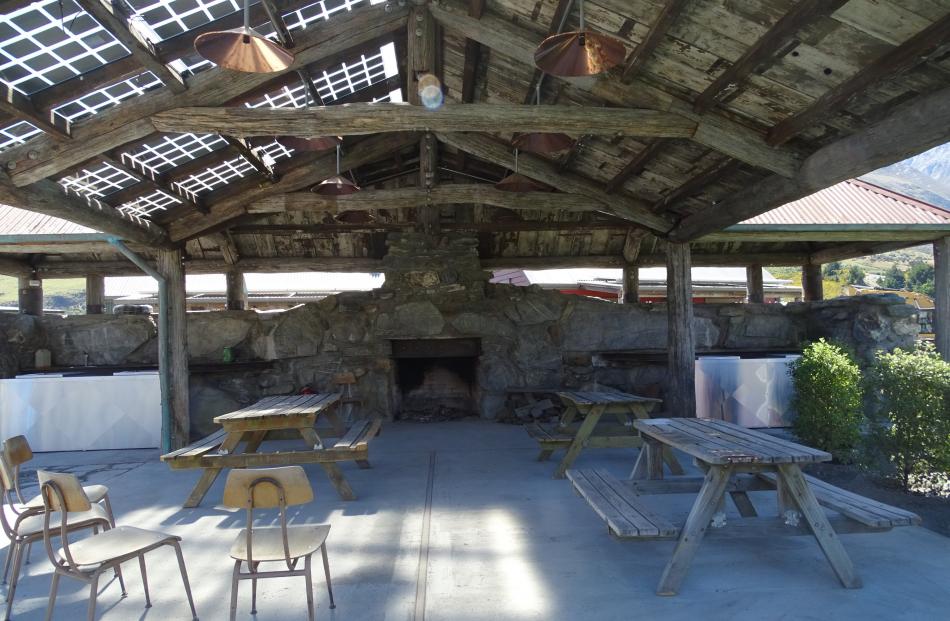 The ‘‘Scheelite Shelter’’ at Camp Glenorchy features a fireplace made from locally sourced stones, a solar roof, LED lighting and electric barbecues. 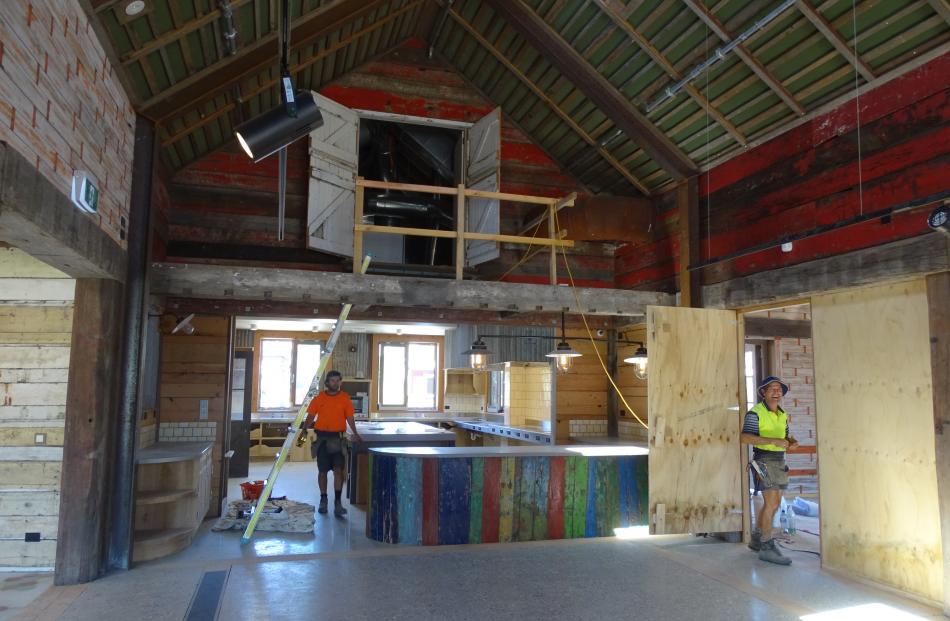 A dining area at Camp Glenorchy leads to a communal kitchen, with the latest technology, and a private commercial kitchen. 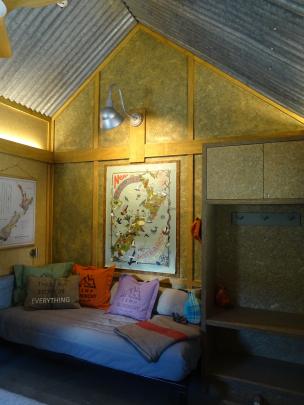 Camp Glenorchy owner Debbi Brainerd’s vision is coming to life inside the cabins.

Almost four years to the day after United States philanthropists Debbi and Paul Brainerd bought a 1.6ha site in Glenorchy, the doors will officially open on their pioneering Camp Glenorchy project, which will be the most sustainable camping ground in the southern hemisphere, if not the world. Queenstown reporter Tracey Roxburgh got a behind-the-scenes tour to see how the project at the head of the lake is progressing.

It's one thing to take a tour of a building site crawling with contractors erecting frames, digging holes and assembling roofs, and hear about what it will eventually look like — it’s quite another to go back 12 months later and see the vision brought to life.

It will open to the public in March. In December  the first certificate of public use certificates were issued by the Queenstown Lakes District Council for five of the camp’s cabins ahead of the first guests arriving on December 20 — part of a "soft opening" to test everything and make sure it was up to scratch.  Contractors are

working to complete the final parts of a complex and innovative project in which the attention to detail is astounding.

Project manager Steve Hewland said while the overall design had come from Mrs Brainerd ,who had a "pretty clear vision", contractors had also played a huge part in the almost-finished product.

"We’ve given the builders the freedom — let them run with and  put their own creativity into it."

Glenorchy artist Dan Kelly has left his mark everywhere — from door handles made from bits and bobs he’s found, to scraps of metal he’s affixed to old, graffitied picnic tables which belonged to a resident but were swapped for new ones bought by Camp Glenorchy. He also made the "Scheelite Shelter", complete with stone fireplace, and a giant moa, known as Irma, which stands outside the main door to the events space.

A "braided river" stone mosaic, representing the Rees and Dart rivers, which leads from the entrance through the site, was created by Jeffrey Bale.

The communal kitchen boasts induction cooktops, for which pots and pans will be supplied, and "never-ending rubbish bags". There is also a commercial kitchen for private events and a dining hall featuring artworks, including an installation called Korowai Kaiti by Paulus McKinnon made with 38 salvaged  fence battens. There’s a  communal lounge, dubbed the Greenstone Room, leading to a  conservatory.

The lounge features a sliding door with multi-coloured textured panels which were once car doors created by Wellington artist Andrew Missel.

Internal cladding has come from Christchurch, and to keep with the rustic theme a modern ventilation duct has been hidden inside reclaimed drums.

The events space, with capacity for 170,  features a dual laser projector mounted to a beam, and has been designed to accommodate everything from weddings to yoga sessions.

Mr Hewland said there had already been "a lot of interest" from the conference and incentive market for the site.

"They’re looking for something new and different — the C&I market is getting really excited about it."

The innovative Phoenix Composting Toilets have been fully installed and are ready for use.

There is no flush option, which will save the camp about 30,000 litres of water a year.

A sensor inside the toilet stalls operates both a light and a fan — the speed of the fan increases when the light goes on to extract odour.

"Bringing people down here and experiencing it, one of the key things people have concern about is odour.

"I went to Seattle, to the Bullet Centre, which is apparently the world’s most sustainable building.

"They’re using the [toilet] units there and there’s absolutely no smell."

Untreated timber sawdust is in the base unit and will be topped up "every 100 uses" and turned regularly.

Liquid will make its way to the bottom of the unit, where it will be pumped up and sprayed on top of the compost to keep it moist, and after 18 months compost will be ready for use on the site.

Part of the Camp Glenorchy philosophy is sharing knowledge about the products and equipment they’ve used and where it has all been sourced from.

Mr Hewland said the Department of Conservation was interested in following up with the suppliers of the toilets to see if they could be used in back-country huts.

"At the moment, all of their waste needs to be helicoptered out, so these guys might be able to work with Doc to get a more sustainable solution, which would also provide them with compost.

"In the States they’ve just installed about 800 in different parks.

"It’s a good opportunity for them [Doc] and for New Zealand taxpayers as well," he said.

Mr Hewland said any excess liquid from the toilets would go to the camp’s black-water treatment area, where it would be merged with black water from the kitchen sinks and treated, as would grey water from showers and hand basins.

The water will make its way through three treatment areas on site — all chemical-free — before being used for irrigation.

Three 60-litre water tanks  will collect rainwater to be used for drinking and in the showers, sinks and Electrolux washing machines — the latter were the world’s most efficient and, at present, the only ones in New Zealand, Mr Hewland said.

The "Scheelite Shelter", complete with electric barbecues, has been designed to look old, and was constructed using poles originally from Invercargill, sarking from Christchurch and roofing iron from a Dart Valley woolshed.Modern technology has been put to use to ensure it is compliant with the current building code, while special solar panels have been fitted to the roof and LED lighting installed in Kelly-designed light shades inside.Guest cabins are dotted around the site and are so well thermally insulated using a material which is 80% recycled bottles, they are  acoustically insulated."The No 1 complaint in visitor accommodation is noisy neighbours," Mr Hewland said.

The first rooms have been fully fitted out and include  furniture made of rimu from a woolshed in Winton, and coat hooks made from a tree brought down by snow last year in Paradise.

Two premium cabins are yet to be handed over. They featured a high-level fit-out, with more privacy and private balconies, while one cabin had been set aside as a "demonstration" of the camp’s solar power system — it was "completely off grid" — to show what could be done in homes, Mr Hewland said.

At night, a bit of "magic trickery" comes in to play courtesy of the camp’s landscape lighting.

"It’s designed to sense your movement — light up in front of you, and go off as you pass it."

The camp will also feature Glenorchy’s first camper van dump station, while concept designs are also in the works for an electric car charging station.

Mr Hewland said for future guests the camping ground would be "a discovery".

"There’s opportunity for people to discover things if they want to.

"If they want to be engaged in that they can go further, if they choose not to, that’s fine — we’re happy to have them as just guests, but we hope that they’ll pick up something and take it home with them.

"We know there are people who will come specially to learn about it.

"The Brainerds are really excited ...  This is the most exciting time for Debbi, with all the finishing touches coming together."

As for the community, Mr Hewland said excitement was building and the reaction to the project had been "really positive", with public tours and open days being well attended by residents and visitors.

"Since we’ve taken back the fencing, that’s been really exciting.

"They can see the landscaping being established and it’s great to see it getting to that stage now."

Pricing ranges from $60 for a shared bunk room bed per night, to $280 per night for an en suite king or split-king singles cabin room, with an option to upgrade to rooms in one of the two deluxe cabins.