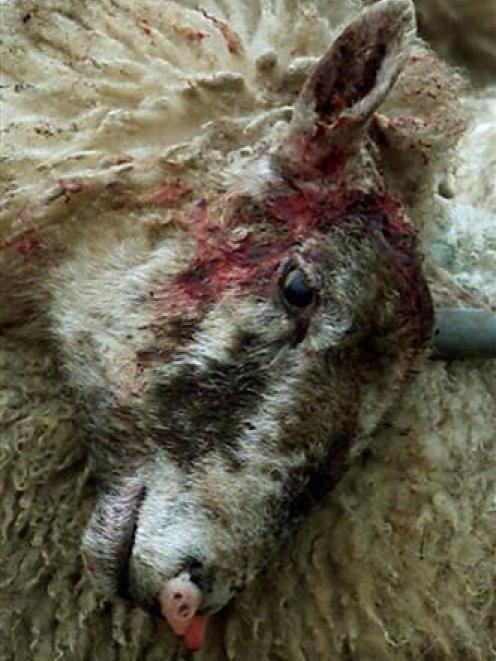 A dog attack on a sheep has angered Angus Gordon, of Riverbank Rd, who said yesterday he had to cut the merino wether's throat because its hind leg had been "eaten out" and it was suffering.

Mr Gordon reported the sheep attack to police yesterday, then contacted the Otago Daily Times because he wanted the public to know how big the dog problem was in Riverbank Rd.

Mr Gordon said he also lost three mutton sheep to dog attacks during the winter and knew of two other sheep, belonging to neighbours, that had been "dealt to" by dogs during year.

Another neighbour had shot a dog on his property during the year, but Mr Gordon said he preferred to use a dog trap.

"I do have a dog trap here, supplied by Lakes Environmental. In that, I've acquired about four dogs in the last six months, and [animal ranger] Darryl Taylor comes out and picks them up," he said.

Mr Gordon believed the dogs he caught were taken to the pound and eventually reunited with their owners.

Mr Gordon did not see the dog that ate the leg of his merino wether on Thursday night.

The sheep had been in a flock of 10 placed on a flat below his house about 10 days ago to keep the grass down, because of the high fire risk.

Mr Gordon said he suspected the dog would have come from the Cardrona River area because he believed that was where people frequently walked dogs off the lead, so they could chase rabbits and let off steam.

Mr Gordon believed dogs were being left behind by people who could not be bothered waiting for them to reappear from a rabbit chase.

"When the dog doesn't come back, they drive off and leave them there," he said. Mr Gordon said the dogs were not at fault.

Sergeant Aaron Nicholson, of Wanaka, confirmed yesterday the sheep attack was being investigated.