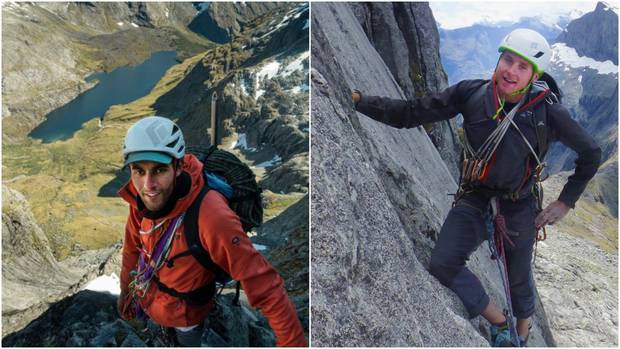 Daniel Joll yesterday gave evidence during the second day of the inquest into the deaths of Conor Smith (22) and Sarwan Chand (27) on April 22 of that year.

The pair died while attempting a challenging route on the south face of Marian Peak in the Darran Mountains.

Mr Joll told the inquest, which is being overseen by coroner David Robinson in the Queenstown District Court, the team aimed to share information and help young climbers to ‘‘navigate the ups and downs of a climber’s life’’.

Mentoring was ‘‘basically being a climbing partner and mate’’.

Climbing was ‘‘exorbitantly risky’’ compared with the risks an ordinary person encountered in daily life; the team had 20 of the most active climbers in the country.

‘‘The risk is really high compared to someone who climbs once a month.

Every climber in the courtroom had lost a climbing partner, had a major accident or been rescued.

‘‘We know the risk, and we’re trying to do that the safest way possible.’’

Asked about public comments by former team mentor Jane Morris after the tragedy that he ‘‘drove the team very hard’’, Mr Joll said he was ‘‘ambitious’’.

‘‘I work hard, and I expect people who join my team to have a good work ethic.

Ms Morris, who is president of the New Zealand Mountain Guides Association, told the inquest she was an NZAT mentor for about two years from 2013, but gave up the role because of a lack of time.

She said her public comments about Mr Joll were more about him personally than his impact on the team.

Asked if she thought the team pushed members beyond their capabilities, she said mentors gave climbers ‘‘guidance on what’s been done and what’s possible’’.

‘‘But ultimately it’s something that comes from your own drive.’’

Mentors had more of a ‘‘tempering’’ effect on the young climbers than a ‘‘pushing’’ one, she said.

Queenstown mountaineer Steve Skelton said the Maid Marian route the pair was attempting was a ‘‘very committing place to be’’.

Although he accepted Mr Smith, who was leading the climb, had ‘‘exceptional qualifications’’, the route was extremely challenging.

The team’s principal mentors were the ‘‘three best climbers in New Zealand’’, and held a different perception of risk to others.

‘‘I think being such amazing climbers themselves, they might under-estimate the challenges that are posed to other climbers.’’

Five members of the team have died while climbing in the past eight years.

Part of the evidence before the inquest is a report into the incident commissioned by the Expedition Climbers Club — of which the NZAT is an offshoot.

NZAT president Ben Dare said the team had implemented several of the report’s recommendations, including better defining mentors’ roles and responsibilities, and introducing older ‘‘advisory mentors’’ to give extra support to members on non-technical aspects of climbing.