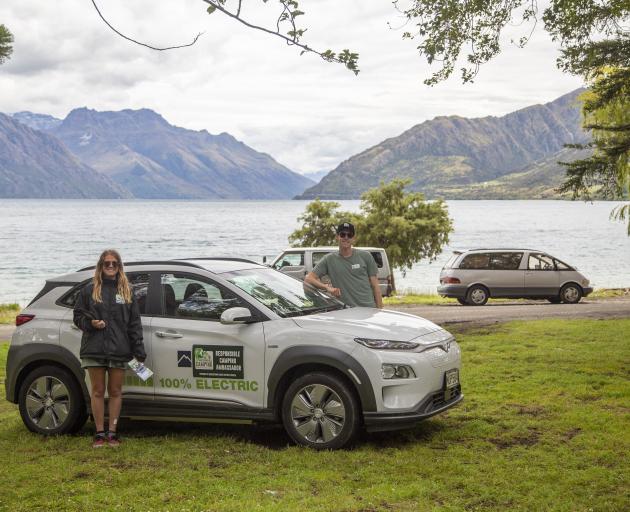 Queenstown Lakes freedom camping ambassadors Sophie Johnston and Neco Wieringa check a lakeside reserve near Kingston yesterday.PHOTO: SUPPLIED
Despite an anticipated increase in domestic travellers to Queenstown Lakes this summer, the number of freedom campers is so far well down on recent summers.

That was in line with a marked fall in the number of freedom camping vehicles coming into the district compared with last summer, Mr Gallagher said.

However, there had been a "huge spike" over the Christmas and New Year period, especially for the few days around the Rhythm & Alps music festival near Cardrona on December 29, which attracted a sellout crowd of 10,000.

"It was those people that weren’t able to get tickets, but still wanted to come and camp and see their friends before or after."

The council received $509,000 from the Ministry of Business, Innovation and Employment for freedom camping initiatives in the 2020-21 camping season.

It is using part of the funding to employ eight "ambassadors" — down from 16 last summer — to educate visitors about the district’s strict freedom camping bylaw.

Mr Gallagher said fewer ambassadors were needed this summer because the council was not operating daytime service hubs for freedom campers, as it did the past two summers.

The ambassadors had two electric vehicles to visit more remote parts of the district.

"They’ve been doing tens of thousands of kilometres out to Glenorchy, Kinloch, Kingston and Makarora on a more frequent basis than we have before."

Their role was to educate visitors on how to camp in a responsible and sustainable way, direct them to local commercial campgrounds and identify trouble spots so that enforcement officers could follow up.

Under the district’s bylaw, freedom camping is banned in town centres, residential areas and along key stretches of road.

Outside those areas, visitors in certified self-contained vehicles can park for up to two nights at any particular spot on Department of Conservation, district council or NZ Transport Agency land, provided they are a safe distance from a road.