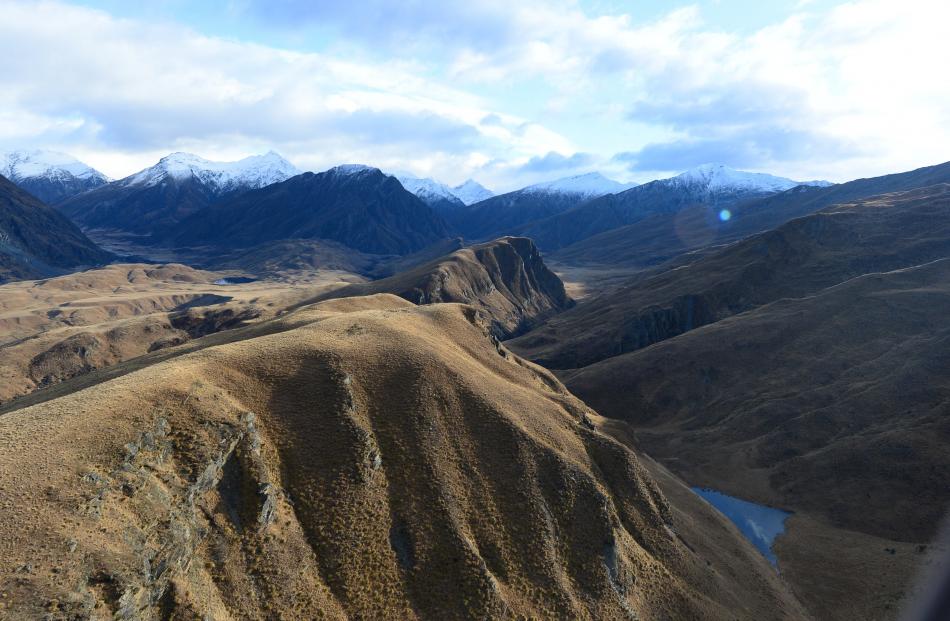 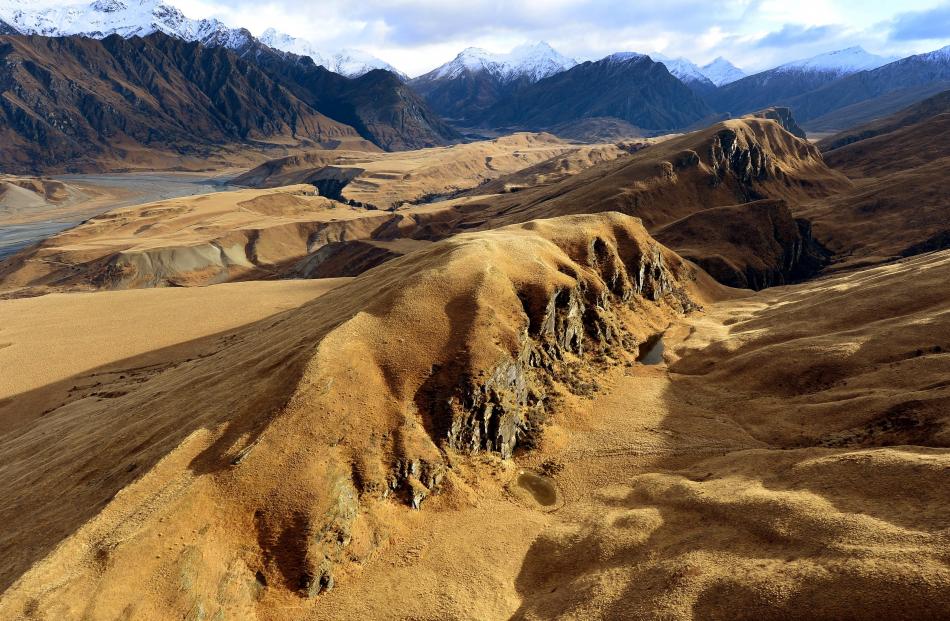 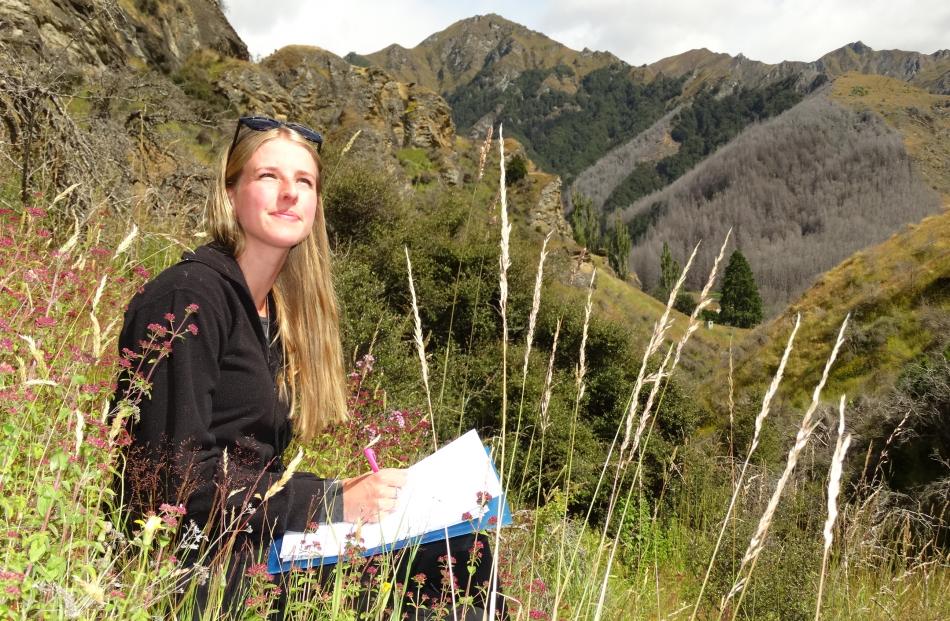 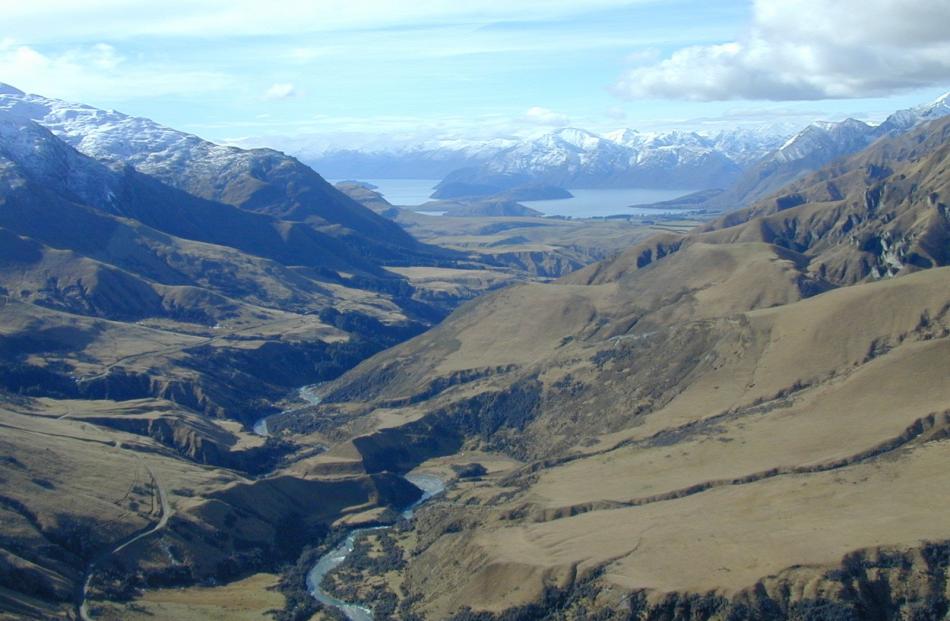 The Motatapu River and Lake Wanaka in the distance, at Motatapu Station. Photo: ODT. 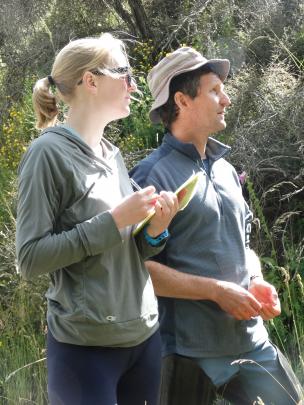 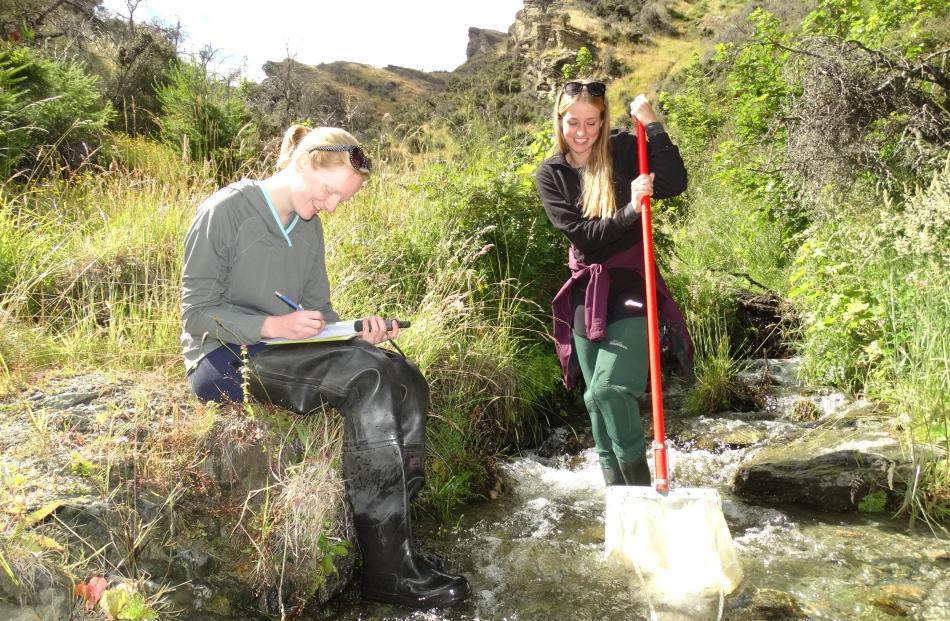 Bryony Alden and Skye Anderson in a tributary of the Shotover River on Coronet Peak Station.

For the past two summers, teams of academics and students from the University of Otago have made field trips into a stretch of spectacular high country between Arrowtown and Lake Wanaka. Queenstown reporter Guy Williams finds out what they are up to.

It is a glorious morning after a night of wind, rain and broken sleep at the Skippers camping ground.

On the final day of a three-day field trip to Coronet Peak Station, two University of Otago summer bursary students are helping Dr Christoph Matthaei, a freshwater ecologist from the university’s zoology department, take water samples from a tributary of the Shotover River.

The hustle and bustle of Queenstown is only 20km to the south, but in this gully on the flanks of the Harris Mountains, it feels like the middle of nowhere.

The trio are on the western edge of Mahu Whenua (Healing the Land), the name given to a vast tract of country encompassing four high country stations stretching from Arrowtown most of the way to Wanaka’s Glendhu Bay.

It is their second trip of the summer to the area, and just one of two dozen streams into which they have been scooping their nets.

Back in a Dunedin lab in a few days, students Skye Anderson and Bryony Alden will count and identify their catch: the aquatic larvae of mayflies and stoneflies, and, as Ms Alden puts it, other "bugs in streams" such as aquatic beetles and worms.

Ms Alden, a postgraduate ecology student from Canberra, and Ms Anderson, a zoology and statistics undergraduate from Wisconsin, are assisting Dr Matthaei with field and lab work for eight weeks.

They say they are lucky to be out in the high country learning the art of field work from a seasoned researcher.

"Christoph always told us as undergrads that a day in the field is worth five days in the lab," Ms Alden says.

Dr Matthaei is one of a team of academics from the university working on a long-term project on the high country farms making up Mahu Whenua: Motatapu, Mount Soho, Glencoe and Coronet Peak.

They are systematically monitoring changes in the land’s vegetation, aquatic life, birds, reptiles and insects. They are putting the land under the microscope for a good reason.

The land’s owner, British record producer and songwriter Robert "Mutt" Lange, is leading and bankrolling a large-scale programme to heal the ravages of 150 years of grazing, burning and mining. Stock has been removed from the high areas, while the land’s biggest threat, wilding trees, are being gradually eradicated. Tens of thousands of native trees and shrubs are being planted, wetlands have been fenced off and safe havens created for birds.

Pests such as goats, stoats, possums and deer are being eliminated.

Farming operations are now limited to about 3000ha of uncovenanted lowland country.

The university approached the QEII National Trust with its idea for the monitoring project in 2014.

It quickly became obvious the project would be a winner for everyone, he says.

The trust does not have the resources to carry out monitoring on covenanted properties beyond the visits that reps such as him make every two years.

Having a scientific assessment of the impact of land-use changes by independent scientists is "extremely valuable".

"You do something with the best will in the world, but sometimes you’re not on the right track.

"If you’ve got the right scientific data, you can make good decisions, and you can perhaps get a pointer in a direction you hadn’t realised."

He relishes his interaction with the academics, and particularly enjoys the students’ involvement, he says.

"They’ve all got a degree of experience, they’ve got a fresh outlook, and they love coming out and getting involved.

"They’re a breath of fresh air."

University of Otago botanist Dr Janice Lord has visited the stations many times over the past two summers.

She admits to feeling a tinge of indignation when she first heard Mr Lange and Ms Twain were buying this land "out the back of Lake Wanaka".

But her involvement with the project has left her "blown away" by Mr Lange’s vision and commitment.

"Here’s someone from the other side of the world who’s doing all these things we really should’ve been thinking about, while instead we’ve carried on with our traditional way of land management.

"Sometimes it takes fresh eyes to recognise a special part of the land that really needs a bit of help."

Mr Lange has found the ideal partner in Mr Hamilton, a high country farmer with a deep knowledge of the area’s historical management, she says.

"What Mutt and Russell are doing is revolutionary, and it will be internationally applicable because they’re trying these different approaches and finding ways of combining conservation of landscapes with people’s objectives for lifestyles and profit.

"It’s not only going to be wonderful fodder for future PhD students and national research programmes, but I believe it’s going to become a really important case study internationally."

Dr Lord’s "vegetation teams" of young and fit students have resurrected old government monitoring sites untouched for the best part of two decades. They have resurveyed a series of transects — marked lines across the landscape — along which vegetation changes can be recorded and photographed over time.

They will compare their new data with a "treasure trove" of historical records and photographic slides, kept by Landcare Research, from when the transects were last monitored in the 1980s and 1990s.

She says the project has major benefits for everyone involved: the Department of Conservation cannot afford to carry out the experiments Messrs Lange and  Hamilton are trying, and academics such as her would never get research grants for a monitoring project of the scale offered by Mahu Whenua.

Messrs Lange and Hamilton benefit from the university’s data, as well as the feedback and expertise of staff and students.

Unlike some of her more purist colleagues, Dr Lord says she takes a pragmatic view of the relationship between conservation and farming practices.

"We’ve got so many areas in the New Zealand high country where we’ve got very good native values, but people live on them and they need to be able to make a profit.

"This is a controversial area — there are a lot of people who would like to see all stock taken off the high country, but there are areas that benefit from light stocking, and there’s scientific evidence to prove that.