By Daisy Hudson
0 Comments
"Thanks for staying, because you’re getting drenched."

That was the half-apologetic greeting from singing superstar Roger Hodgson as he took to the stage at Saturday’s Gibbston Valley Winery Summer Concert.

The rainy, cloudy day was a far cry from last year’s heatwave, but from the huge roar of the crowd as the former Supertramp frontman sat down at his keyboard, they did not seem to mind.

Some embraced the wet weather, diving down the hill as the rain turned the grass into a mud slide.

As well as Hodgson, who had the crowd singing along to classics like Breakfast in America, fellow headliners James Reyne, of Australian Crawl, and Mark Seymour, of Hunters & Collectors, acknowledged the precipitation.

"I appreciate the irony," Seymour joked, after opening his set with an acoustic version of When the River Runs Dry.

As well as performing their own hits, the Aussie pair delighted the crowd with a cover of Dragon’s April Sun in Cuba.

Hodgson, the final performer of the day, shared his love for New Zealand, saying it was "wonderful to be here".

"I so look forward to coming down to New Zealand — it really is God’s country," he told the crowd.

"Especially this area. Around every corner, there’s something amazing." 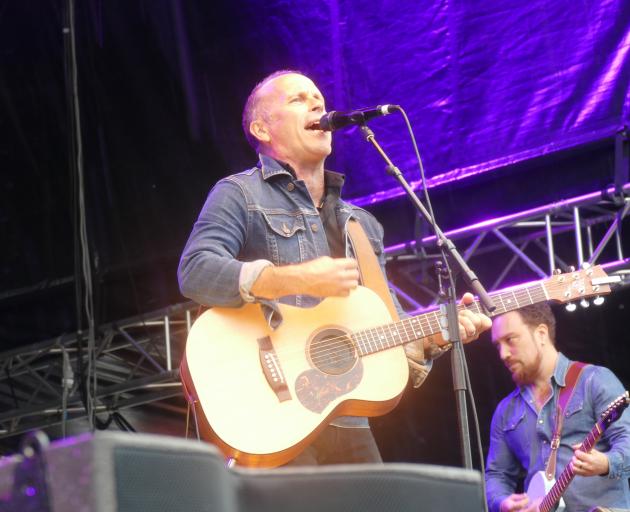 Aussie rocker Mark Seymour, of Hunters & Collectors, belts out one of the band’s hits. Photo: Daisy Hudson
Grammy-nominated singer Toni Childs took fans on a journey from her classic songs through to new material.

She wished everyone a happy New Year, saying she hoped it would be a "year of beauty and kindness".

It appeared the majority of the crowd was in good spirits as police reported no major incidents relating to the event.

"It always gives us immense pleasure to bring the Summer Concert Tour to Queenstown and have the opportunity to showcase our beautiful country and people to our international guests, and with this being our ninth year we can’t wait to celebrate our tenth anniversary in 2020."