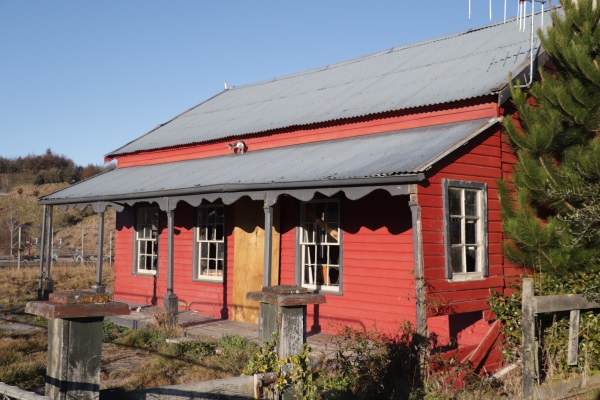 The front of Bridesdale Farm's McBride Cottage. Photo: Mountain Scene
One of the Wakatipu’s oldest buildings is looking worse for wear, but will soon get a new lease on life, its owner says.

Bridesdale Farm’s McBride Cottage, also known as the Red Cottage, was built about 1872 by one of the Basin’s original farming families, and is about the same age as central Queenstown’s oldest building, Williams Cottage.

Queenstown lawyer Karen Castiglione and partner Russell Hall bought the cottage and the 1100 square metres of commercially-zoned land it sits on in 2018.

She says they got consent for restoring the cottage and converting it into a cafe about a year ago, and have begun prepping the building for the project.

That’ll be music to the ears for former landowner King Allen, who sold the Bridesdale Farm land to the subdivision developer Chris Meehan.

Allen tells Mountain Scene he’s frustrated it’s taking so long for the cafe to be established.

He liked Meehan’s vision for the cottage to be upgraded into a cafe and community hub for residents, something that was heavily marketed to prospective section buyers as a selling point.

Allen’s disappointed it’s been allowed to become increasingly “dilapidated” over the past few years.

Castiglione, though, promises she’ll get the cottage checked out and says she’s annoyed stones have been lobbed through its windows.

“I’m disappointed to hear it’s not looking tidy, so I need to go and give it some attention.

“It’s possible it does need a tidy-up.”

Although old, the cottage does not have a Heritage New Zealand listing, apparently because of extensive modifications over the years.

A heritage report commissioned by Meehan in 2015 found it had been progressively modified by subsequent owners, but is still a good record of an early settlers’ building.

The report from Jackie Gillies+Associates said the “main part of the original cottage, including remains of the original shingles and door/window, still survive in very good condition”.

Castiglione says its floors have been broken up in readiness for removal and interior linings have been stripped out ahead of the restoration and conversion project.

“We’ve just completed a couple of other projects and this is the next one the team will be turning to.

“Hopefully we’ll find a cafe tenant and have it running as a cafe.”

It’s too soon to give an estimated completion date, she says.

Arrowtown firm Origin Consultants has had heritage conservation input into the plans.

Castiglione says the cottage’s restoration is the first stage of their plans for the site.

Plans for five townhouses on the site have consent but are “on the backburner”.

“It’s a difficult project financially to stack up, particularly in these times, but we’ll be getting to it when the funds allow,” she says.