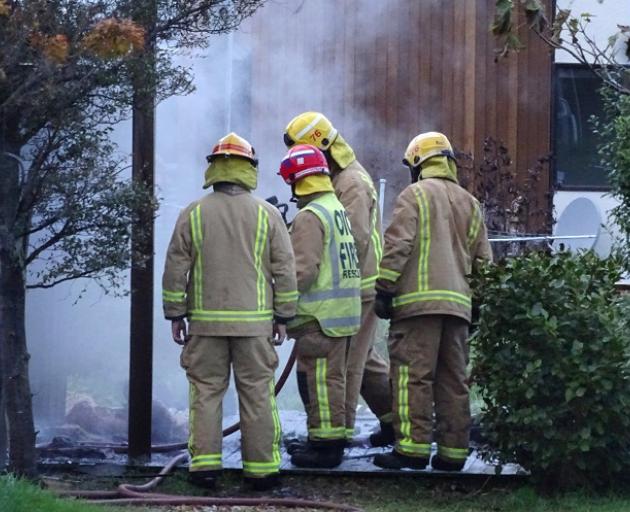 He says the cause of a Suburb Street sleepout fire last month hasn’t been determined, as it was so extensively gutted.

Residents said there were 10 people living in the property, which has two other sleepouts.

Jones warns that sleepouts and other rental accommodation may in some cases be incorrectly or inadequately wired.

When there’s, for example, only one power outlet, tenants using multi-boxes to plug in appliances and heaters can overload the electrical system.

In general, Jones says there’s a fire risk from “the increasing activity of people in smaller homes that aren’t designed for those sort of occupancy rates”.

He’s even heard of hot-bedding where one person goes to work and another comes home to take their bed.

Winter elevates the risks, he says, because heaters generate a large amount of power.

With all housing there’s also the added threat of ceiling fires from people stoking up woodburners where the chimney flu hasn’t been cleaned.

With overcrowded houses, Jones says “it’s often a case of absentee landlords who through ignorance or lack of care may not actually know what’s going on in their buildings”.

“While we’ve made progress on housing for people who live in the district, particularly through the Secure Home project, we remain concerned about these itinerant workers’ overcrowding, unsanitary conditions and safety, and it will continue to be a major focus of council to get an improvement.”

Perhaps surprisingly, council regulatory boss Anthony Hall says overcrowding’s not been a major issue over the past six to 12 months.

He says if they receive a complaint, his enforcement team work with other arms of council to look at the likes of health, housing improvement and Building Act regulations, while there can also be some planning implications.

“There are landlords who set up some pretty reasonable [rental] accommodation with the likes of a large kitchen set-up and everybody knows each other, it’s a safe environment and it’s not unhealthy.”

One issue which Hall says isn’t always related to overcrowding is where someone sets up extra kitchen facilities.

“Even just someone having a wee gas burner or microwave or a benchtop can get caught up within our rules.”

Local Pure Property manager Mark Blake says the overcrowding issue, and knock-on effect of utilities being overstressed, is usually only an issue in properties that are privately managed by owners.

His company’s policies and procedures prevent these issues, he says, from initial reference-checking and vetting through to routine property inspections.

He believes it’s vital landlords know about the recently-updated Healthy Homes Act and ongoing tenancy law changes, “especially in a place such as Queenstown with its varying seasons and varying ages of properties”.

Jim Boult is absolutely correct in saying that they have been talking about it in council for 3 years....they are still yet to actually do anything.
It's disingenuous for the mayor to say that they have made progress with the secure homes project and then imply that overcrowded rental homes are only occupied by itinerant workers. How many "secure homes" have actually been delivered and occupied?
It seems that this council are only good at talking.