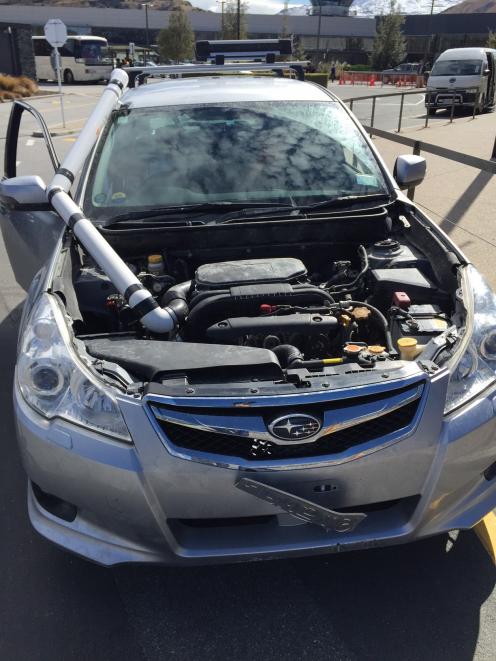 This modified rental car drew the attention of police when it was spotted being driven in the Queenstown area. The occupants, a group of North Islanders holidaying in Queenstown, have since decided to buy the car rather than face a large repair bill. Photo: NZ Police.
A group of North Island men who modified their rental car to go through rivers near Queenstown have bought the vehicle rather than paying to have it put right.

The Subaru Legacy, with no bonnet and a home-made "snorkel" hose attached to the motor’s air filter intake, drove past police at Queenstown Airport on Wednesday.

Constable Matt Hargreaves, of Queenstown, who pulled it over, told the Otago Daily Times the car was ordered off the road for being unsafe.

The driver was  ticketed for operating a vehicle in a dangerous condition.

A representative of the nearby rental car office  inspected the car, after which the rental agreement was torn up for breaching conditions.

Const Hargreaves said the North Islanders, thought to be aged in their 20s, could have faced a civil claim for damage, including bumper damage from "off-roading" through river fords near Arrowtown.

"These boys have had a discussion amongst themselves and approached the rental company and said: ‘Look, we’ll just buy it off you, if that’s acceptable’.

He called the incident "a bit bizarre" but said the men were "lovely guys".

"They wanted to make it right — they knew they’d messed up."

"I think they knew what they were doing — they’d taken the bonnet off and left it at their rental accommodation. Their intention was to put the bonnet back on and return it.

"I don’t think there was any ill-intention there — I think it was just boys being boys and having a bit of a laugh."

"You can’t just be doing it yourself and driving it around, especially when it’s a rental vehicle."