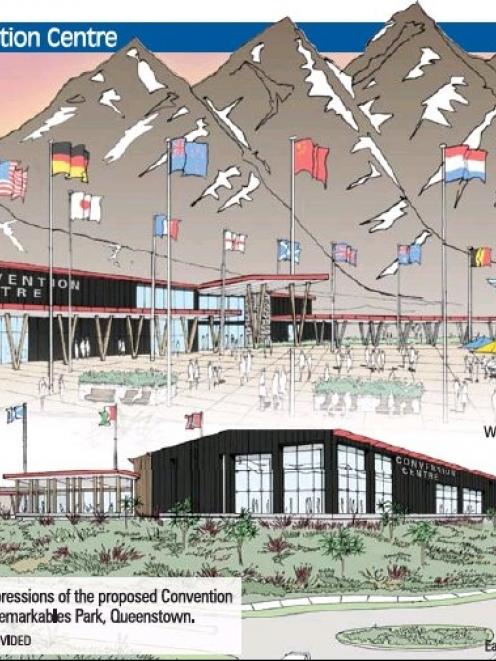 Queenstown developer Alastair Porter says his company, Remarkables Park Ltd (RPL), has the money to fund a proposed conference centre at Frankton, the company believing it to be the ''optimal site'' and the proposal the one which would deliver the ''greatest economic value to the district''.

However, Queenstown Lakes District Council chief executive Adam Feeley said the council would consider the development of a convention centre at its Lakeview site at its full meeting next week.

In a statement Mr Feeley said it was ''unclear what, if any'', weighting the RPL proposal would be given, particularly given the ''lack of ... any detailed information'' on several aspects of RPL's proposal.

Mr Porter said the RPL centre could open in 2016, ''well in advance'' of any convention centre being built by the council at its Lakeview site, and the council could ''develop Lakeview for affordable housing or sell the site''.

He said the company had provided information to the council on ''at least 10 occasions'' and councillors had been ''repeatedly invited'' to the site for a briefing.

''I just don't understand Adam Feeley's problem with this.

''Would we be spending this time or money on design and hiring people to work for it if we weren't able to do it? I don't think so.''

Mr Porter plans to lodge resource consent for the ''major multimillion-dollar'' 3900sq m centre next week, and aims to have stage one, covering 2700sq m, open in the second half of 2016.

To date Mr Porter has not put an exact dollar figure on RPL's proposed centre, but said yesterday ''we know we can handle it''.

In September Mr Porter said his centre was ''based on private equity funding'', but the company ''remained open to joint venture capital injections'' from other private equity and central and/or local government sources.

Yesterday he said additional funding from other sources would either allow RPL to scale up the facilities or begin developing stage two in conjunction with stage one.

''We do not claim to be building to the highest specification - we are building a conference centre that works well for Queenstown and relates to the environment.

"We are not trying to match Sydney, Dubai or Hong Kong - the key reason people come to Queenstown is Queenstown.''

The two-stage development had been designed by architects Mason and Wales after ''research trips'' to Australia, Rotorua, Auckland and Hamilton had ''fine-tuned'' what was required.

He said the activity was allowed within the Remarkables Park zone and it was anticipated consent would be granted by the end of next month.

After that RPL would work on detailed construction drawings in preparation for lodging building consent.

In a statement Mr Porter said RPL had ''consistently delivered what it has said it is going to deliver and will continue to do that''.

''The conference centre project is well within RPL's capacity to fund and operate. The council centre will cost the community in excess of $110 million in development, building and financing costs.

''Two-thirds of this is proposed to be paid for by ratepayers outside the CBD, yet the CBD will get the most benefits. In contrast, the Remarkables Park Conference Centre is not going to be financed by rates.''

Subject to consents, it was expected construction would begin next autumn.

At a glance
To be built in two stages.
Stage 1: A 2700sq m flat-floor facility with an overall height of about 2m, featuring two adjoining conference spaces, breakout rooms and an exhibition and pre-function foyer area, catering for up to 900 delegates.

Stage 2: Additional 1200sq m comprising three additional breakout rooms and additional plenary, banquet and exhibition space. Subject to consent, construction could begin next autumn with the facility planned for completion by the second half of 2016.