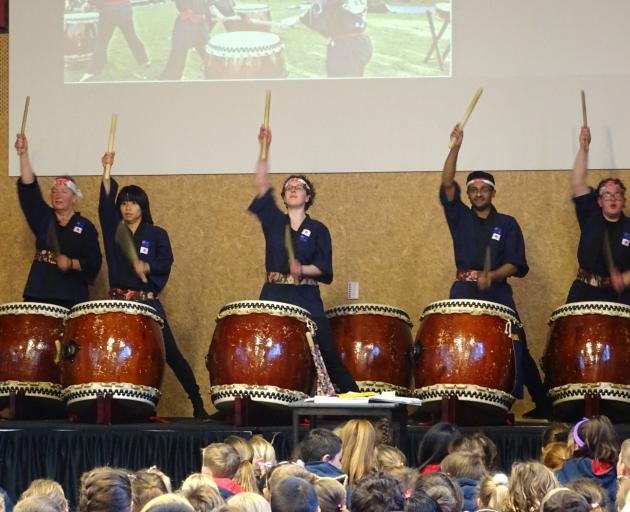 The Queenstown school held a special assembly yesterday to mark the beginning of its Cultural Extravaganza, featuring drummers from Dunedin-based group O-Taiko.

Students got the chance to learn all about the Japanese art-form, and will also get to enjoy Russian ballet and ju-jitsu workshops and performances, as well as events for the International Food Festival and Parade of Nations later this week.

Teacher and organiser of the extravaganza, Cath Hudson, said it was ``hugely important'' to teach children a mixture of cultural values, especially in New Zealand, where there was a high number of migrant workers and immigrants.

``There are so many skills and attributes that children and adults from different ethnicities can offer the local community and share with us.

``We are celebrating our cultural diversity over three weeks.

``This week in particular is the Cultural Extravaganza, which has kicked off with an amazing start with the O-Taiko drummers just doing a fantastic performance.

``You could feel it running through your whole body, your chair, down to your feet.''

The assembly started with pupils performing a traditional haka, followed by the school's song.

Prof Henry Johnson founded the Japanese drumming group in 2010 with the help of the University of Otago, Dunedin City Council and the Dunedin-Otaru Sister City Society.

O-Taiko claims to be the most southerly taiko group in the world, and is made up of university students and staff, as well as other taiko enthusiasts.

Mr Johnson, who studied music in Japan, said the group was thrilled to teach pupils at the school and ``see the smiles and engagement that the students have with the music''.

``Playing music like this really is an eye-opener for cultural celebration.

``Some of our players have been former students from schools and in the community.

``They experienced the taiko drumming quite a few years ago now and they've eventually come through the system and some of them have graduated from the university, but were inspired to play the drums with us.

``We see the younger children especially, by having hands-on experience doing the workshops, it is really a way in.

``It is something that the whole body can take with it.''

Children and their parents have been encouraged to bring in traditional food from other countries to celebrate the food festival and dress up in cultural clothes for the parade later this week.

The school received a grant from the Asian Foundation to help make the week of multicultural activities possible.