Use of treated human waste on farmland in Australia is widespread but in New Zealand it seems to be an idea just too hard to swallow. Local authorities such as the Queenstown Lakes District Council are trying to find a place for growing piles of ''biosolids'', as Mark Price reports. 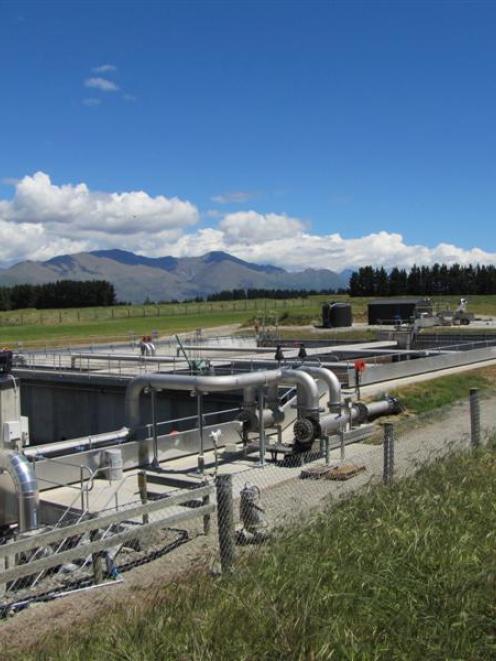 Sludge from the Queenstown Lakes District Council's Project Pure sewage treatment plant near Wanaka Airport is destined for a place yet to be determined. Photo by Mark Price.
Luggate is the latest flashpoint in the always controversial matter of how human effluent is disposed of.

The Queenstown Lakes District Council proposes Luggate host a new plant on its outskirts to dry Wanaka's sludge so it can be used as fertiliser on neighbouring farms.

The idea is being promoted by Fulton Hogan Ltd, which has two ''willing'' farmers.

But the plan has created an outcry from Luggate.

In 2010 there was a similar outcry from Tarras when it was proposed the sludge be used on farmland there.

And there are regular outcries from the Gibbston Valley, near Queenstown, where Wanaka's sludge is now dumped in a landfill.

Council general manager infrastructure Erik Barnes has inherited the job of negotiating a way through the strife.

He must find the place where the sludge - or ''effluent'' or ''product'' or ''biosolid'' or ''sewage'' solids - can be disposed of safely and with a minimum of cost and fuss.

After a rowdy Luggate meeting recently, he reaffirmed to the Otago Daily Times the council's intention of pursuing resource consent for the Luggate drying plant.

But he was less committed to the part of the proposal that would have the dried sludge spread on the farms near Luggate, even though the council's original proposal was to seek resource consent for both the drying plant and disposal sites at the same time.

''That was our initial hope. I think we have to also listen to the community, and so we need to just consider what are the potential other options ...''

The Kaikoura District Council is held up as an example of a local authority that has found an option acceptable to ratepayers.

It is just a regulatory step or two away from disposing of its 1500-tonne backlog of sludge on forestry land - an option that sidesteps what the experts call the ''yuk factor'' of putting sludge on farmland and therefore back into the food chain.

The forestry option has not been explored in any depth by the Queenstown council, although it is an idea that appeals to Mr Barnes.

''Use of the biosolid on forestry land is a great idea and council would support the use, but it also has to make economic sense to apply the product on any land-use type.

''In regards to forestry in our district it comes down to the cost of application of the biosolid on our steep terrain and the distances to other forestry blocks.''

The Queenstown council owns about 600ha of forestry at Ben Lomond, Coronet Peak and Queenstown Hills - all used extensively for recreation.

ESR social scientist Virginia Baker said in Australia biosolids were mostly disposed of on agricultural land and were regarded ''more clearly as a resource than a waste''.

Biosolids are valued as a way to improve soils and save money that might be spent on other fertilisers.

But Ms Baker acknowledges New Zealanders have a different view of how they use their waste.

''We don't have the same drivers to use it here, and the faecal aversion thing is quite well-established in the literature.''

When the Kaikoura council set out to dispose of its sludge, it faced the same hurdle as that facing the Queenstown council. The public was concerned the sludge would contain pathogens, heavy metals and chemicals that might be detrimental to health if put back into the food chain.

With government funding, the Kaikoura council engaged the Centre for Integrated Biowaste Research to carry out the public consultation process.

That began with a hui in October 2009 and three hui later, after much ''engagement'' and expert input, the ratepayers gave the thumbs-up to the forestry solution.

But using biosolids on farmland remained the least favoured option.

Unlike the Queenstown council, the Kaikoura council had the advantage of owning exotic forest on flat, sandy land.

The centre's 48-page case study of the Kaikoura experience drew on a Nelson study showing biosolids boosted radiata pine stem volume by about 30% and economic return by about 40%.

So for Kaikoura, putting biosolids on forestry land appears to have solved the problem.

But the answer to Wanaka's sludge issue is not so simple.

Bruce Jolly, of Ardgour Station, was the ''willing'' farmer during the 2010 Tarras debate.

He points out Central Otago land is ''not great'' for forestry.

And for that matter, he says, using sludge on forestry is a waste of good ''product''.

''The high organic matter in it makes it very good for a dry-land soil because it increases the water-holding capacity.''

If forestry is not an option, and dumping it in a landfill is no longer appropriate, then the Queenstown council has few if any options other than using it on farmland.

And that will require the council to persuade the public to get over the ''yuk factor''.

While discussing the issue with the ODT, Mr Barnes made one pertinent observation:''Anyone who has ever been to Australia'' would probably have already eaten food produced with the help of biosolids.