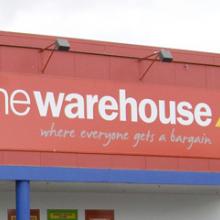 The Five Mile retail centre store has a floor area of about 3900sq m, about 25% bigger than the Remarkables Park store on the other side of Frankton Flats.

The listed company, New Zealand's largest retailer, has added 12 full-time equivalent jobs in Queenstown and the opening hours have been extended an extra four hours. The opening hours will be 7am to midnight.

``It's gone relatively smoothly moving our stock from one store to another.

``We had to condense it up [at Remarkables Park] but we tried to keep as big a range as we could without affecting our customers.

The extra space has been dedicated to a garden centre, apparel and footwear, including changing rooms, and promotions area.

In a statement, The Warehouse chief executive Pejman Okhovat said: ``We have invested considerable time into the newest Queenstown store, and the Five Mile location offers customers improved flexibility and convenience to shop at a time that suits them.''