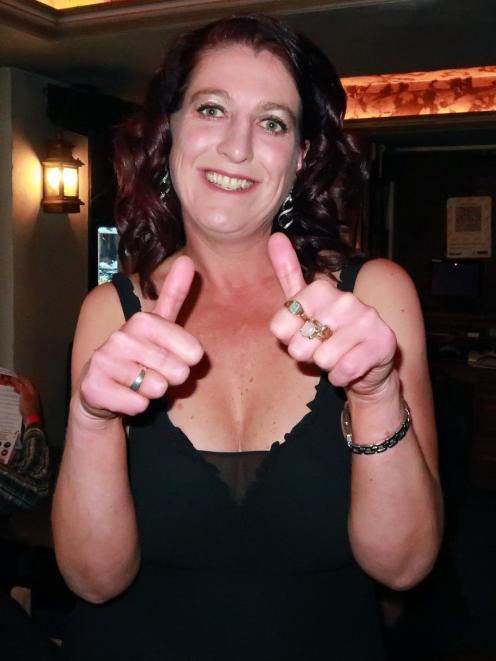 Kingston resident Amanda Morris celebrates receiving residency after 15 years in New Zealand, at The Ballarat Trading Co, Queenstown, on Saturday. PHOTO: PHILIP CHANDLER
A British woman finally has the right to remain in New Zealand after 15 years of "uncertainty" on one-year visas.

Amanda Morris (46) arrived in New Zealand in 2005 determined to get residency after travelling the world.

When her working holiday visa expired, she was able to secure a one-year essential skills visa, but there began a long battle with Immigration New Zealand.

Her struggle to achieve security pushed Ms Morris to the edge.

She battled with alcoholism and mental health issues, made worse by two spells as an illegal immigrant.

First she said she was caught by a fraudster, who she believed had taken $3500 from her to secure a business visa as a shareholder.

It was only when filing a tax return she discovered she was never registered and had been working illegally.

But after pleading with Immigration, she was granted a six-month work visa.

Her second spell in limbo came after she was let go by a bar in North Otago because of a downturn in trade.

On her return to Queenstown she was taken on by the newly opened Countdown, where she has remained working and fighting for the right to stay.

Her road to residency has not been easy.

She has sold her grandfather’s wedding ring, her furniture and many clothes, as she racked up $40,000 worth of immigration and legal fees, Ms Morris said.

"If you want something bad enough, stick it out, but it is hard and not an easy ride."

When Covid-19 struck, her application for residency was again held up and she feared the end of the road.

But, last week the visa finally came through and she was able to breathe a sigh of relief.

Now, three years sober and in possession of a kitten, Ms Morris said she was looking forward to the future.