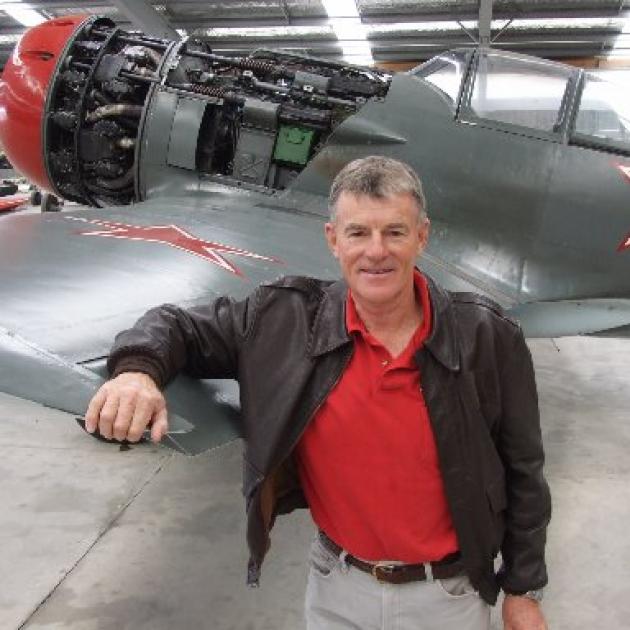 Pilot programmer . . . John Lamont relaxes next to a Russian Lavotchkin warbird. Photo by Matthew Haggart
John Lamont is hoping time stays on his side in the build-up to the 11th Warbirds Over Wanaka airshow this Easter.

The former RNZAF and Air New Zealand commercial pilot is the man in charge of the aerial display programme at the southern hemisphere's largest airshow.

Mr Lamont has spent the past 18 months devising the aerial programme for the show, which runs to a strict schedule for the more than 80 aircraft involved.

‘‘It's challenging trying to come up with a schedule that keeps the crowd involved all the time and not waiting. You want to have something happening all the time so people aren't sitting there wondering ‘what's next?' and ‘when is it coming?' ''

Time-keeping and scheduling are crucial to the airshow programme and Mr Lamont has to take into account the different abilities of the various display pilots and the aircraft they are flying.

Combining these into an effective display and then coordinating fighter jets and RAAF aircraft flying in from Christchurch to slot into the programme kept ‘‘everything very tight''.

International airshows were ‘‘often notorious'' for running overtime, he said.

However, the tight show programme had managed to avoid the problem during its 20-year history, despite a schedule which had been described by some airshow enthusiasts as ‘‘overly ambitious'', Mr Lamont said.

While Mr Lamont appeared laid back about his airshow role and the responsibility it carried, he admitted to feeling the pressure and ‘‘more than a little stress'' as the countdown to the Easter weekend take-offs started.

‘‘It can get harder and harder to get a good night's sleep the closer we get, because I often find myself waking up and mentally checking lists of things I have to do.''

Good Friday's trial show run was usually the most stressful day, because it involved a lot of liaising with arriving pilots and their vintage aircraft from around the country, and also catering to the demands of different people ahead of the Saturday's official opening, Mr Lamont said.

Once the various pilots had received their briefing and flight time slots, Mr Lamont said, things ‘‘tended to run smoothly, although we always have a plan B up our sleeve''.

‘‘By Sunday evening, we've usually got everything running just how we want it,'' he said, joking.

This allowed Mr Lamont the time to do what he loved the most and take to the skies in some of the vintage Warbirds aircraft. He was scheduled to make up to three flights in different displays as part of the airshow.

He said he derived the most pleasure from his role when seeing the faces of people in the crowd enjoying the show and also from visiting former wartime pilots enthused about seeing the planes they once flew airborne again.

‘‘A lot of people don't get to see these aircraft - they are working pieces of history - and it's important to keep them operating, so people realise they are not just there to gather dust and sit in museums.

‘‘There is nothing like the sound and sight of these aircraft up and running again and flying through the air,'' Mr Lamont said.