A wizard on the stage in NZ 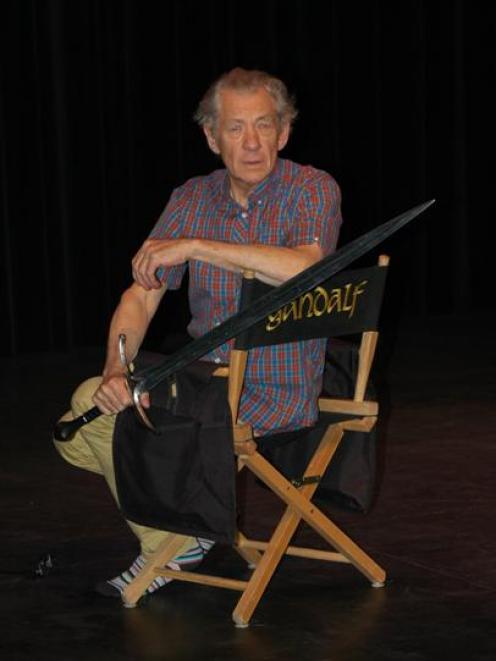 Sir Ian McKellen is touring his one-man show through New Zealand and will perform at the Lake Wanaka Centre on June 9 and 10. Photo by Steve Thomson.
Sir Ian McKellen has been in New Zealand working on The Hobbit. In his spare time, he is touring a one-man show raising funds to restore the quake-damaged Isaac Theatre Royal, in Christchurch. He talks to Lucy Ibbotson.

British actor Sir Ian McKellen is a fan of Flight of the Conchords, has visited Milford Sound six times this year, and is a friend of Sir Peter Jackson. But perhaps his greatest show of affection for New Zealand since returning to reprise his role as Gandalf in The Hobbit is his one-man-show fundraising tour to benefit an earthquake-damaged theatre in Christchurch.

Ian McKellen on Stage has already played to several sold-out audiences in the North Island, and will continue its successful run at other centres around the country during the next month, including two shows in Wanaka on June 9 and 10.

The tour is to raise funds for the Isaac Theatre Royal, inChristchurch, where Sir Ian performed two years ago, in Waiting for Godot.

"My first question when I heard about the earthquake was 'Is the theatre OK?' and initially it was thought that it was, but no, later shakes have pulled it about a bit," Sir Ian told the Otago Daily Times.

"I went into the Red Zone a couple of weeks ago and was allowed into the theatre ... the fabric of the building itself is a bit rickety, but it's rescuable, unlike many other iconic buildings in the city."

Sir Ian is devoting his weekends to the tour, and insists he is having "a lovely time" doing so.

"It's not hard work for me, at all. I really enjoy it. When you all know why you're in the theatre, when you're helping people who need their own theatre repaired, it makes it a bit more special." Sir Ian was surprised to have received such glowing reviews for his shows so far.

"Any questions you've ever wanted to ask about Gandalf or Magneto or King Lear, now's your chance, but we get on to other topics as well, it's entirely up to the audience, really.

"Theatre's always exciting because you never know what's going to happen ... actors always say it depends on the audience whether the show goes well, but particularly in this case. I mean, there's nobody else on stage but me, although I do give the audience a chance to come up and do a bit of acting with me if they fancy it, so I am living on my wits. But that gets the adrenaline running and I enjoy it."

Despite never having performed on stage in Wanaka - the only Otago stop on his tour - he has flexed his acting muscles in the area before.

"I think we filmed there. I'm afraid I can't be absolutely certain but I remember Wanaka very well ... and as you see I'm coming back. I really enjoyed it."

"Filming in Wellington is quite unlike filming in London or Hollywood, in that everybody working on the film seems to know each other. It feels like a home movie, the most expensive home movie ever made.

"And Peter Jackson is such a welcoming, friendly man that you sort of join in with the group and the company and feel very much at home. That's the experience of all the foreign actors who come here, without exception."

In becoming something of an unofficial tour guide for friends and family who have visited him in New Zealand while he worked on The Hobbit, Sir Ian has relished showing off its scenery.

"I've been to Milford Sound I think six times this year, but I could happily do it another six.

"I think if I'd have been brought up in New Zealand I'd never have left."

Despite his fondness for his adopted home, Sir Ian has no intention of following Hollywood director James Cameron's lead and moving to New Zealand permanently.

"I love living in a large city and, with all due respect to Auckland, London's my city and I do miss it ... it's wonderful while I'm here, but then when I go home, I'm glad of that, too."

Sir Ian returns to London in July, but not before enjoying another sold-out show, this time as an audience member.

"I'm going to see Flight of the Conchords ... Bret McKenzie's in The Hobbit, he's also in Lord of the Rings, and I know the TV show, but I've never seen them live on stage."

He expects to be back for the premiere of The Hobbit in Wellington later this year.