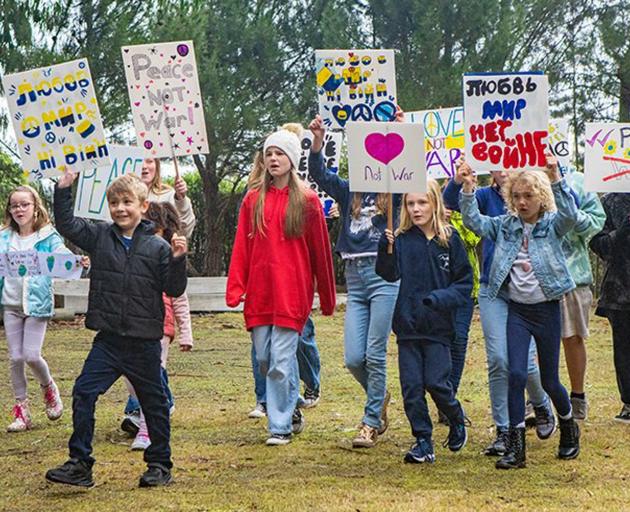 The project is the brainchild of hair salon owner-turned-realtor Deborah Coburn, who woke up at 3am six weeks ago with the lyric "we need peace, love, not war" swirling around in her head.

The previous night, she was at a friend’s party where Michael Jackson’s Earth Song was playing, before the host encouraged everyone to gather together to send love to Ukraine.

"It’s a powerful song ... and it was a very powerful thing to actually take that time and think about Ukraine," she said.

Early the next morning, Mrs Coburn got up and promptly penned an entire song, named after the original lyric, dedicated to ending the war in Ukraine.

"When the conflict started, I remember one particular scene — it was a little girl on a bus leaving her home city, it was raining and she was distraught and I thought, ‘what can we do about this?’

"My heart goes out to them ... in today’s age, it’s just unthinkable that this can happen."

After writing the song, she knew she wanted to produce a music video that gave children a voice to broadcast its message.

The project quickly became a community affair, with more than 50 people, 30 of whom were children, coming together.

Mrs Coburn joined forces with Paul Inger from The Recording Room, recruited singer Jackie Bristow’s students and tapped into the talents of songwriter Molly Devine, harpist and music director Kate Targett-Adams and composer Marc Hamilton to bring it to life.

"I went out to Thomas Brown Art Gallery, and they decided to close the gallery one Sunday for us so we could film the video out there."

Filmed and edited by Queenstown Media, the final product is a three-and-a-half-minute plea for peace from the community.

"I had an idea I wanted the innocence of children at the start [of the video] ... then we had the five key children singing, and then we had a protest march with all these extra kids involved," Mrs Coburn said.

"One of the little girls, Eva, made all these signs in Ukrainian and Russian."

She said she was moved by the "time and effort donated" by locals, and the whole experience had been "a really beautiful exercise".

"We just had this huge, really quick collaboration of all these people," she said.

The video links to the Ukraine-based charity People in Need, which will receive any funds raised by the project.

Mrs Coburn hoped the video would go viral, to raise as much awareness and money as possible.

"I hope it’s one of those videos, the way it’s been filmed and how we’ve done it, [that] will really evoke emotion in people."