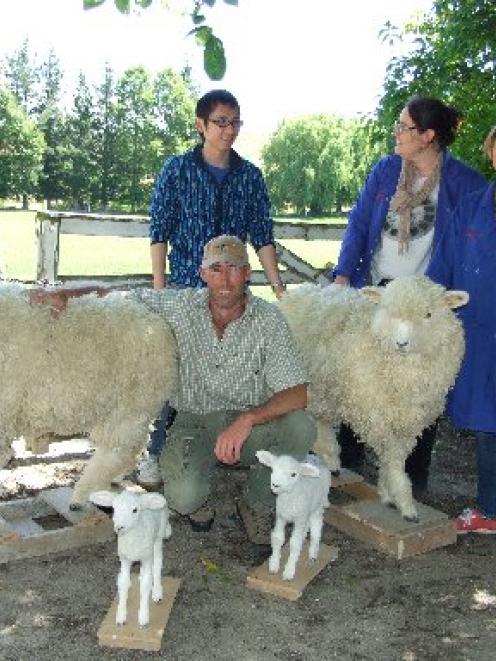 ''If only they were all this placid,'' says farmer Gary Kelliher (front) while (back, from left) Li Nan, of the Shanghai Science and Technology Museum, and Otago Museum staff Emma Burns and Ellen Sima take a closer look at the sheep exhibit. Photo by Lynda Van Kempen.
Springvale Romneys bound for Shanghai had sheepdog Storm completely baffled yesterday.

The small flock of sheep and lambs, preserved by Arrowtown taxidermist David Jacobs, were returned to their Springvale farm so farmer Gary Kelliher could see the ''finished article''.

The three two-tooth ewes, each with a newborn lamb, are destined for a special exhibition developed by Otago Museum to mark the opening of the new Shanghai Natural History Museum in China.

Otago Museum staff collected the sheep from the taxidermist and called in to Springvale on their way back to Dunedin.

As the animals were unpacked for a photo, Storm eyed them suspiciously and remained on alert in case any made a break for freedom.

''David's done a beautiful job'' agreed his father, George, who also lives at Springvale. Museum natural science research and interpretation co-ordinator Emma Burns said the sheep would be used in an ''interactive'' display.

''We're delighted to be able to share this touchable flock with our friends in Shanghai. It's going to be well-loved and the sheep will probably end up looking like well-loved teddy bears after a while.''

The new museum is being developed by the Shanghai Science and Technology Museum, which has an exchange programme with the Otago Museum.

Li Nan, a staff member at the Shanghai Museum, has been at Otago Museum since early October and returns home today . He predicted the sheep display would be very popular.

''It ... will be a good chance for Chinese to touch a sheep - most will have never had the chance to touch a specimen like these before.''

Romneys were chosen because they were the most popular breed in New Zealand, making up 68% of this country's sheep population, Miss Burns said.

The Kelliher family donated the sheep.

''We kept them in a dry paddock for a week or two and kept them away from the creek, before David came and collected them,'' Gary Kelliher said.

The lambs were stillborn.

''This use for our stock is certainly high on the novelty factor - I'm not sure if it's a good example of productivity, though, only having a single lamb with each ewe,'' he joked.

''It's a struggle being a sheep and beef farmer these days, so anything that helps promote our sheep around the world is a plus.''

The idea for the display came after another Shanghai museum staff member on an exchange visit to Otago said she wanted to touch a sheep before she returned home.

The stuffed animals will be flown to China and placed on display in July next year.