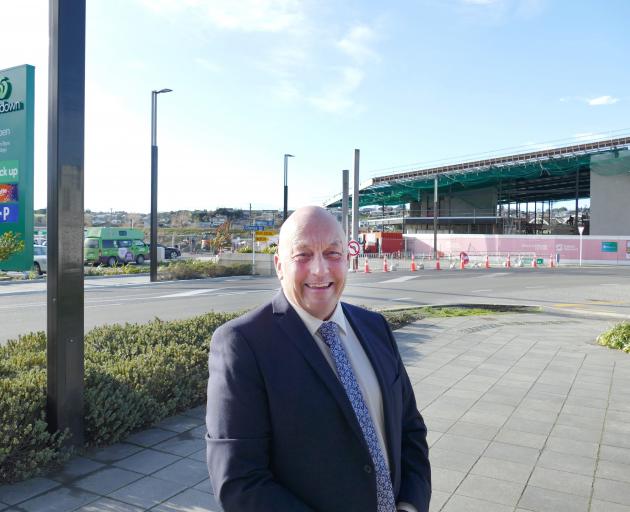 Clutha Mayor Bryan Cadogan stands in front of a partly transformed northern entrance to Balclutha’s main street on Monday. He is seeking re-election. PHOTO: RICHARD DAVISON
A southern mayor says he has "unfinished business" as he seeks a fifth consecutive term.

Clutha Mayor Bryan Cadogan (62) said he had endured a "challenging" past three years in office, but told the Otago Daily Times his appetite for local politics remained undiminished.

At the last two elections, Mr Cadogan has been elected unchallenged. However, at least one further candidate will stand this election, in the shape of council member Bruce Graham.

Mr Cadogan said he welcomed an election battle, and would stand on his record of strong leadership through an unprecedented three years of Covid-19, global economic challenges and "societal unrest".

"A vote for me is a vote for experience, honesty, and a track record of passion, pride and commitment," he said.

"The ability to still drive forward in an inflationary global environment while being ever mindful of the people dear to my heart, the pensioners, the vulnerable, and young families striving to get ahead in the district, that remains the challenge.

"I’ve got a track record of containing rate rises second to none in New Zealand. I do not intend to give way, and see some of the rate rises we’ve seen in other places."

Mr Cadogan has maintained a rates cap of 4% during his past two terms in office.

The former shearer, and father of two, said he was proud to have seen Clutha flourish under his council’s stewardship.

"You look at the unemployment stats, you look at the vitality in our rural community and ... the positive growth. Look at the number of apprenticeships that have been taken on in the last year. These are things that are the indicators of the momentum our district has under way. Council has had a pivotal role in that."

During the past two years, the council’s MSD-funded Jobbortunities programme has helped place more than 180 locals in employment, including 39 apprentices in the building trade.

However, that criticism was not always fair, he said.

"Specifically regarding Three Waters, people are starting to look at who to blame. Last October, when the Government mandated, they denied councils any chance to exercise control over the process.

"That left two options. Some have chosen to scream and yell. But we have burrowed in and fought to the highest level, by engaging with the working groups."

"We’ve got 73 changes inserted in the process. Going in as chair of one of the working groups doesn’t mean you’re in agreement with the reforms ... It means you’re there to stand up and challenge those reforms for the benefit of all stakeholders, including our many rural water schemes here in Clutha."