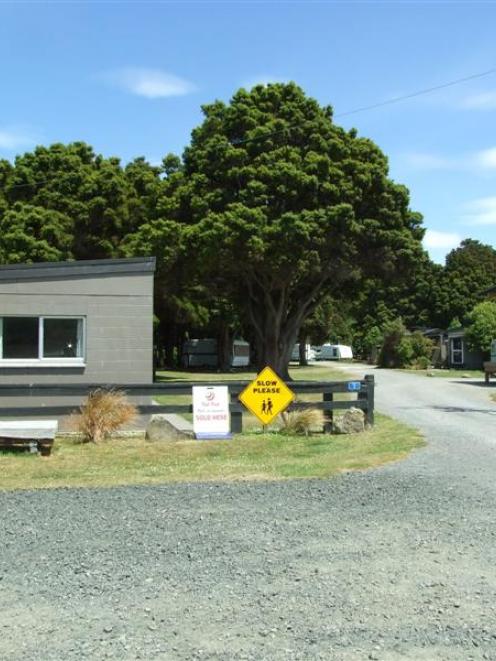 The Pounawea Motor Camp backing on to the Pounawea Scenic Reserve. Photo by Helena de Reus.
A request to extend the lease and area of the Pounawea Camping Ground has drawn a mixed reaction from ratepayers, with the council indicating it will decline a ground extension, but grant a longer lease.

The Pounawea Camping Ground is on Department of Conservation (Doc) land next to the bush-clad Pounawea Scenic Reserve.

The camping ground has remnants of native bush dotted around the site and is located on the outskirts of the Pounawea township in the Catlins, with the beach and Catlins River estuary to the east.

The proposal attracted 59 submissions including a petition with 20 signatures from Pounawea residents - 36 opposed and 23 in support, with five submitters speaking at a council hearing last week.

Jane Young said the main reason for most submitters' opposition to the extensions was Mr Maxwell's poor guardianship.

In the summer of 2009/10, Mr Maxwell cleared a section of native bush from the scenic reserve without permission.

Mrs Young described those actions as ''wanton destruction'' and ''vandalism''.

Pounawea resident Robin Miller said he was opposed to the lessee, not the land, because the trees were felled illegally. He said if the lease was to be extended to 2029, then it should be for open to the public for tender.

''The camp has more of a chance going ahead if it is owned by someone. I think the council should have its own manager to run it - it is a profitable camp.''

Speaking to the council's corporate services committee later that afternoon, camp leaseholder Glenn Maxwell said he was surprised by what he heard at the submission hearing, that the majority of people with concerns had not contacted him about them.

He regretted felling the section of bush without permission, but said he had thought that section of land was a part of the leased area.

''I did make a mistake with the bush ... No, I won't be felling any more trees without permission. I understand the severity of the issue.''

Mr Maxwell said while numbers allowed in the camping ground were restricted to a maximum of 200, he hoped more space would relieve congestion over the Christmas holidays''I put my heart and soul into that camp. I need the extra time ... I want the camp to grow.''

Catlins Cafe owner Steve Clarke said he regularly had good feedback from campground visitors about the lessee, and described the ground as a ''wonderful asset'' for the district.

Council district assets manager Jules Witt said the council had considered the lease amendments in 2009, agreeing to them subject to the ''satisfactory resolution'' of an outstanding greywater discharge issue from the camping ground and approval from Doc.

A new sewage system for the camping ground is being commissioned which the council said would resolve the outstanding greywater issue.

Cr Vollweiler moved that the committee recommend the council ''revegetates'' the area that was cleared and that the lessee be required to remove all buildings and property from that area, and it be appropriately fenced until it can be utilised by the council again.

Crs John Cochrane and Hamish Anderson were excluded from voting as they were not present during the debate.

Council will consider the recommendations next Thursday.

After council makes its final decision, the submissions and its confirmed decisions will be forwarded to the Department of Conservation for consideration under the Reserves Act 2009.