By Richard Davison
0 Comments
A South Otago phoenix has risen from the ashes.

In late January, Balclutha group the Phoenix Singers made a southern-wide appeal through the Otago Daily Times for a new conductor for the 21-year-old choir. 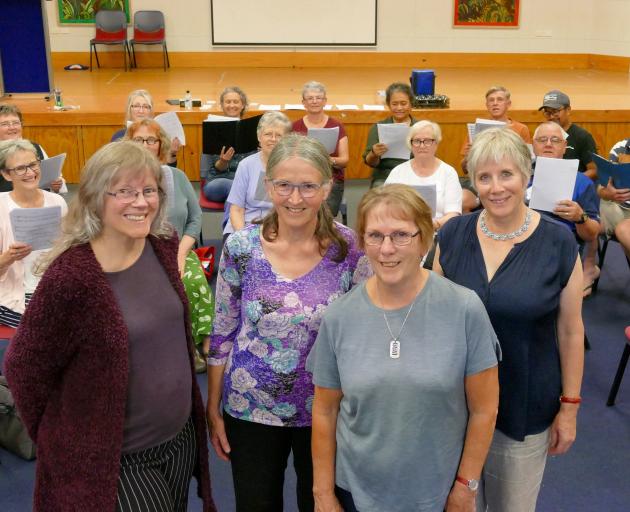 The Phoenix Singers' new interim conductor Claire Stevens (third from left), and three new assistant conductors (from left) Cyndilu Miller, Suzanne Schofield and Denise Dent, pose before the choir's rehearsal at Rosebank School hall, Balclutha, on Monday night. PHOTO: RICHARD DAVISON
That mellifluous call was answered by Dunedin-based serial choirmaster Claire Stevens, who said she could not bear the thought of a choir having to disband for want of a leader.

Mrs Stevens would travel from Dunedin to the choir’s Monday night rehearsals as often as possible between now and a planned 21st anniversary concert in Balclutha on May 30.

"I lead two other community choirs in Dunedin and Oamaru, and accompany a third on piano. Getting people together to sing is just something I really enjoy," she said.

She had joined her Dunedin choir 22 years ago, and conducted it since 2005, from which point her commitments had snowballed — albeit happily.

"Singing is something that gives people so many benefits in wellbeing and elsewhere, and it doesn’t really matter what genre that’s in.

"My other choirs cover a range of genres, accompanied and a cappella, so we’ll work up a programme that appeals to the singers and their audience."

Mrs Stevens said she was inspired by the choir’s enthusiasm and talent thus far.

"I was very impressed during our first rehearsal. They picked things up quickly, and have obviously enjoyed good training and leadership.

"I feel privileged to be able to help them through this interim period."

Keeping an eye on succession, choir president Stephanie Bowden said their new conductor would also help train three new assistants, with a view to their taking the shared helm at the end of her tenure.

"We weren’t inundated with offers to lead, so we’re delighted Claire has stepped forward to help us out, and that three of our lovely singers have also offered their services to help with warm-ups and perhaps lead a song."