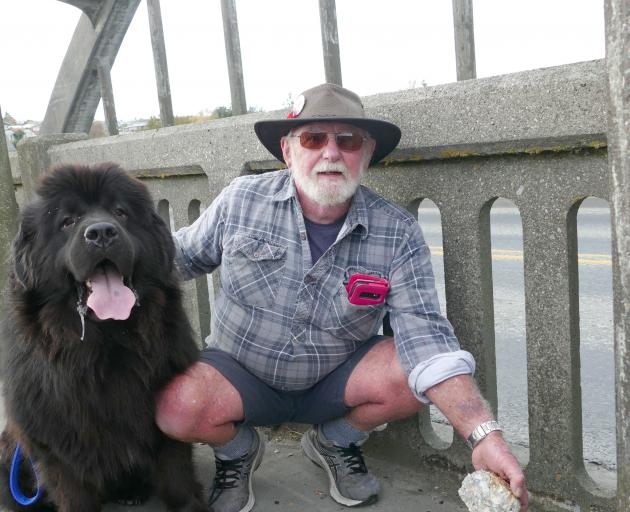 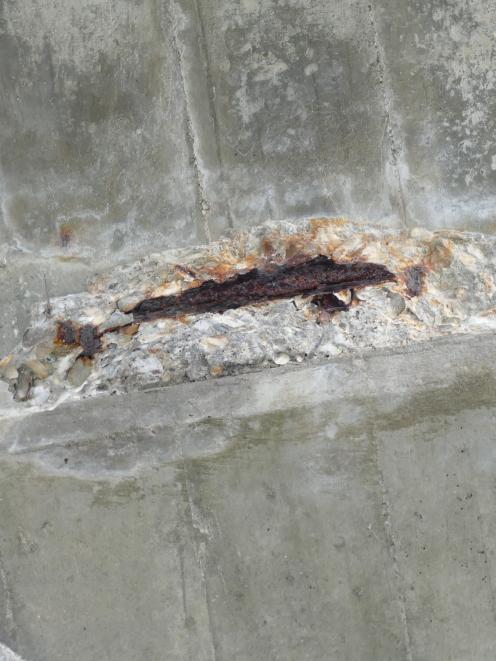 The section of arch from which the concrete appears to have fallen.
However, it appears the rubble may be an indication the bridge is safer than it might seem.

Retiree Graeme Blackmore walks his 2-year-old Newfoundland dog, Beer, across the 86-year-old bridge most days, but was shocked yesterday to discover several fist-sized pieces of rust-fringed concrete lying on his route, about midriver.

A closer inspection revealed they appeared to have fallen about 10m from an exposed section of concrete arch above, where matching rusted reinforcing could be seen.

Mr Blackmore said the discovery was all the more alarming as he sometimes stood beneath the arches to allow other pedestrians or cyclists to pass.

"If that hit someone on the head it would be no joke. It’s not a huge piece, but it’s big enough, sharp-edged and, from that height, could cause a serious injury or worse."

He said although the bridge was largely held in fond regard by locals, and was a symbol for the town and district, it was time for it to be reviewed.

He said it was not unusual to find concrete fragments knocked off the bridge’s lower sections by trucks.

"This hasn’t been caused by a truck, though."

The New Zealand Transport Agency was able to put Mr Blackmore’s concerns to rest, reporting the concrete was left over from a safety inspection on Monday night.

NZTA Coastal Otago senior network manager Chris Harris said the inspection was part of a regular programme of maintenance scheduled to avert just such an accident from occurring.

"[The concrete] came from an area where the steel reinforcing bar is corroded. The concrete then becomes loose and we remove it to ensure it doesn’t, in future, endanger any pedestrians."

The areas of flaking would be treated later this year.

Mr Harris said the bridge was in generally good condition.

"All structures require ongoing maintenance to ensure their design life is maximised, and the Balclutha Bridge has many years of service ahead."