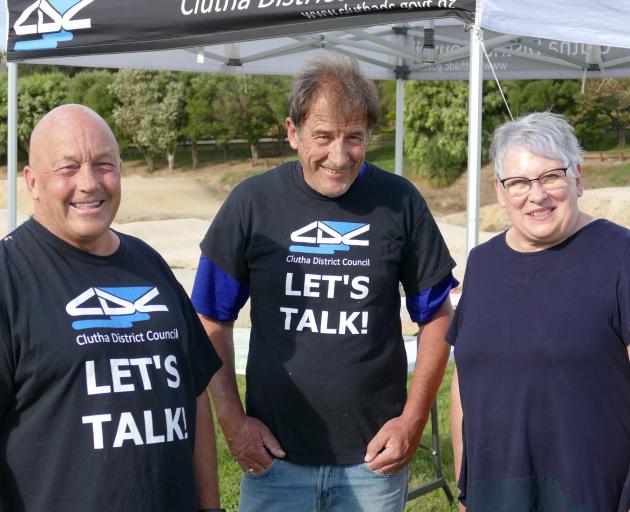 Taking part in a Clutha District Council Our Place Kaitangata community plan consultation session at the town’s skate park on Wednesday night are (from left) Clutha Mayor Bryan Cadogan, and Crs Bruce Graham and Alison Ludemann. PHOTO: RICHARD DAVISON
A Southern council is trying out politics over a pint as a novel means of community outreach.

The Clutha District Council will hold the next in its series of Our Place Kaitangata community plan public consultation sessions at the town’s Crescent Bar & Grill from 5pm next Friday.

A further session will take place at the community boat ramp the following morning, from 7am to 10am.

Perhaps appropriately, the council will provide free coffee during the Saturday morning session.

Kaitangata-Matau ward Cr Bruce Graham said the council had needed to "think different" when organising the latest of its series of community plan consultations.

"As there’s no coffee shop in Kaitangata, and because it’s a hardworking community where many people are at their jobs during the day, it made more sense to catch residents after hours, at community facilities and hubs like the swimming pool, the BMX park, and the pub.

"We’ve had a pretty good turnout for the sessions to date, and I expect we’ll add some more useful feedback before we’re done."

"It’s notable, though perhaps not surprising, that we haven’t had a single negative comment from Kaitangata residents during our sessions here.

"Kaitangata has always been a very active community in seizing on to new projects and making them a success, and this latest process looks like it will help continue Kai’s long tradition of self-determination."

Mr Cadogan said the Our Place community plans, conducted for five other parts of the district so far, placed an emphasis on "bottom-up" decision-making.

"Kai is a perfect example of this, where there’s strong community leadership encouraging residents to share and promote their ideas for improvements to town amenities.

"It’s all about giving ownership to the community."

He said about 70 people had attended the sessions to date, yielding about 90 individual pieces of feedback.

Ideas included improving access to the Clutha River; enhancing walking and cycling opportunities; improving parks and reserves; and investing in community facilities such as the pool and playground.

These would be collated once community consultation was finished at the end of this month, and final projects would be identified and approved for signing off by the council at its meeting on September 15.