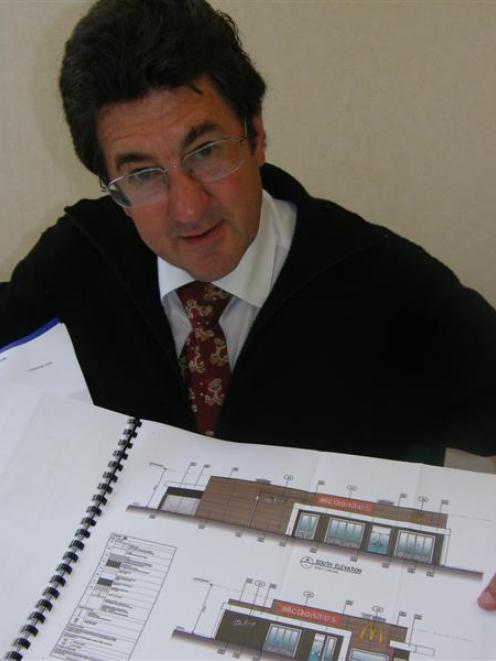 Fast food restaurant chain McDonald's is planning to build on the Kelvin House site in Gore.

McDonald's was planning to demolish Kelvin House, which is situated on Gore's Main St, in order to build the new restaurant that would have a floor area of 442m2 and would include a McCafe, indoor playground, party area, drive-through and stacked carparking, Mr Hovell said.

The restaurant would be open seven days a week, 24 hours a day, the consent stated.
Kelvin House owner Les Glassey confirmed yesterday he had sold the building.

The site was in a commercial zone and the setting up of a McDonald's restaurant was a permitted activity allowable under the district plan, Mr Hovell said.

‘‘It is considered that the application can proceed on a nonnotified basis,'' the consent stated.

McDonald's had applied for a restricted discretionary activity consent for the car-parking and delivery areas with the council, the application stated.

The stacked car-parking will be located at the west side of the building.

McDonald's national communications manager Kate Porter confirmed McDonald's had bought the Kelvin House site, subject to the gaining of resource consents, and the takeover date had been set for May next year.

Ms Porter said the company was always on the lookout for new sites and Gore fitted the company's criteria.
The criteria included how well a town was doing economically and sufficient through-traffic volumes, Ms Porter said.

‘‘We have had some very good feedback from smaller towns we have gone to,'' Ms Porter said.

It was expected the Gore outlet would be run as a franchise, she said.

The building of the restaurant would bring with it job opportunities. It was envisaged the outlet would employ between 30 to 40 fulltime equivalents, which would equate to between 60 to 80 staff being ‘‘on the books'', Ms Porter said.

While McDonald's generally employed nominated national building contractors to undertake restaurant construction there was often scope for local contractors to pick up sub-contracting work, she said.

If the resource consent process went well it was envisaged the outlet would open at the end of next year, she said.

The building will be in keeping with the upgraded McDonald's designs, which originated in Australia and the United States, she said.

When asked what the cost of the project would be Ms Porter said it was too early to disclose a figure.