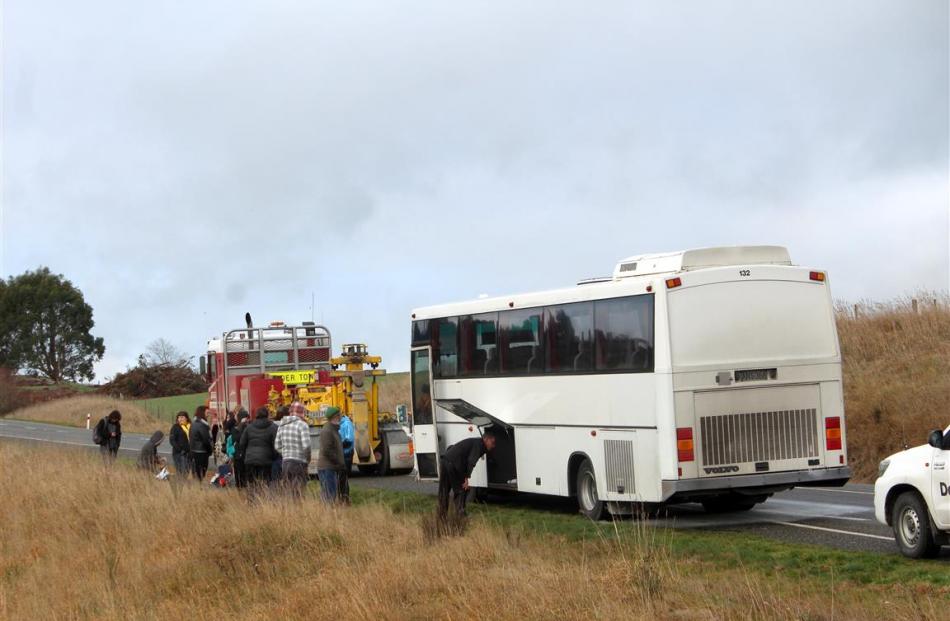 A truck lines up to tow a bus stopped near Clinton after an engine fire, as passengers wait for a replacement bus. Photo by Samuel White.

A routine bus trip from Invercargill to Dunedin came to a halt and stranded passengers when the engine caught fire near Clinton yesterday morning.

Bus passenger Belinda Zaat-Barber, of Invercargill, praised the driver, who, she said, reacted calmly to the situation.

She first noticed something was wrong when the bus appeared to lose power.

The driver told the passengers not to be alarmed and that the bus would need to make a quick stop as the electronics had failed, she said.

The bus was stopped on the corner of Miller Rd and the Waipahi Highway, 14km south of Clinton.

All passengers, of which there were about 20, were evacuated.

The driver attended to the back of the bus where the engine was emitting smoke. It was believed to be caused by an electrical fault.

"The driver did a really good job of looking after his passengers and did all the right things.''

Mrs Zaat-Barber said if it was not for the quick thinking of the driver things could have turned out differently.

"It's not often that we get on a bus and it breaks down like that.''

The fire brigade was called shortly after 11am.

Clinton Volunteer Fire Brigade Deputy Chief Fire Officer Brent Mackie said one appliance was sent but it was all "done and dusted'' when he arrived.

A replacement bus took the passengers to Dunedin, about an hour later than scheduled.

The original bus was towed away to be checked.