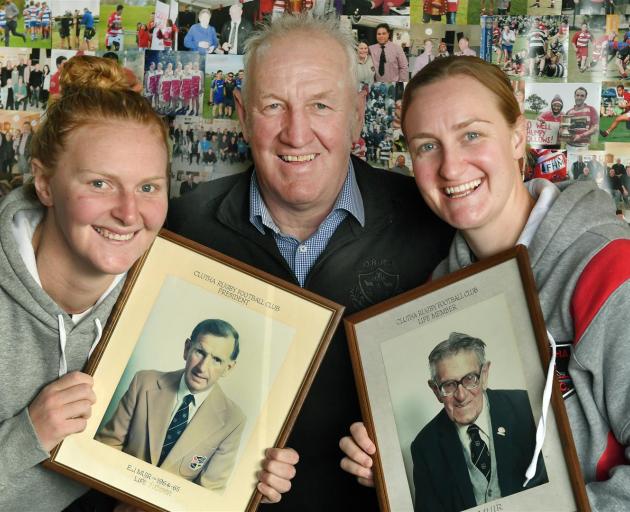 Neville Muir follows in the stud marks of father Ernie (left) and grandfather Thomas as a life member of Clutha Rugby Club. Daughters, former Otago players Greer (left) and Larissa, also aspire to join the ‘‘wall of legends’’ one day. PHOTO: STEPHEN JAQUIERY
Three points on the board.

The club may be well advised to leave a couple more spaces for bonus points, however, as Muir daughters Larissa and Greer also harbour quiet ambitions of making their mark down south.

In characteristically modest fashion, Muir senior (59) refuses to take any credit for the long and successful history he shares with the club.

Joining the Clutha prems aged 17, he played for the next 15 years and set point-scoring records that still stand today, during what turned out to be one of the most successful periods in the club's history, under coach Ken Milne.

A fullback with occasional spells at first-five, Muir racked up the points with his boot as Clutha went unbeaten in any match for seven years on the trot, during a golden run in the mid-1980s.

The apex was 300 season points in 1988, something he attributes humbly to "a team effort".

"The team scored a lot of tries. If you're the goal-kicker, you'll pick up a few points."

Muir's love of the sport grew at his dad's shoulder during the 1960s.

"You start out as a little kid clearing up the clubrooms and sweeping the stands with your father, and at some point you pick up a ball."

All four generations of Muirs have represented Otago during their on-field careers; Greer (25) still plays at second-five/centre for Pirates in Dunedin, and former Pirates first-five Larissa (30) is now semi-retired, having broken her arm last year.

The sisters enjoy further rugby pedigree in the shape of twin All Black great-uncles (Laurie and Jimmy Haig), on mum Jan's side.

Larissa described her father's ascent to Clutha legend status as an "awesome achievement".

"We've been organising things in secret for quite a while, so it's only now we can say how proud we all are," she said.

Although Greer had played for Clutha as a youngster, Larissa had never had an opportunity.

"There just hasn't really been women's rugby down here. If that changed, I think we'd both like to get involved one day."

The prospect of joining their father on the wall provided extra incentive, she said.

"It would be something special."

"Special" triggers a wry smile from her father.

"That was my nickname back in the day. We'd better not go into details though. Let's just say I had a few nicknames and leave it at that."

On retiring as a player, Muir continued his contributions to southern rugby as coach, referee, and touch manager, and remains involved to this day.

"You just do what you need to do. You're not in it for the accolades. Rugby brings you together and keeps you together, friends for life."