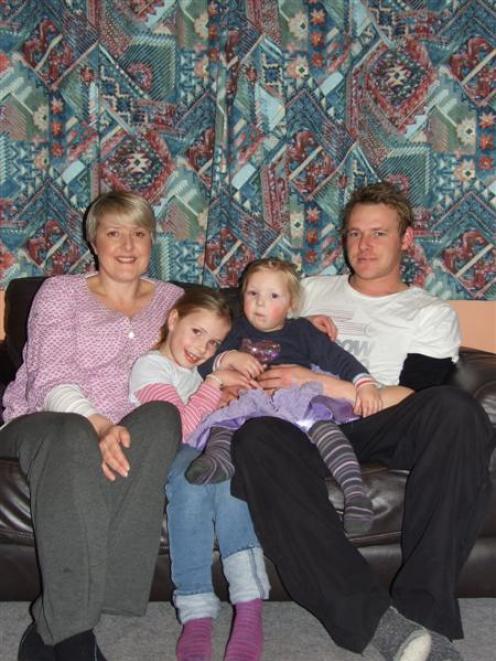 The Owen family, Jodie, Charli (7), Meg (3) and Terry. Photo by Helena de Reus.
A new home specially designed for a South Otago family will soon take shape in Kaitangata. But this home will be no ordinary house.

Jodie and Terry Owen, of Kaitangata, have two daughters, Charli (7) and Meg (3), who have undiagnosed cerebella ataxia, a condition which affects the girls' co-ordination and balance, and makes them tire easily.

Their mother, Jodie, said the future was uncertain as the condition was rare.

"It's not a diagnosis; it's just what they've got. It's so rare, we don't really know what will happen."

Both girls have walking frames they use outside the house, and for longer distances Charli has a wheelchair and Meg a buggy.

"Everything the girls do, just everyday things, they have to fight their muscles to do it," Mr Owen said.

Last year, the Owens sold their home in Stirling, to rent in Kaitangata and be closer to their extended family.

Friends Derek and Kylie Craig, of Cromwell, decided to organise a charity project to give the Owens a purpose-built home.

"It's very humbling and you think there's so many other people who are more deserving.

"But they're our friends and they want to do it for us. At the end of the day, it's for the girls," Mr Owen said,Mrs Craig said the family's former home in Stirling was not set up for what the girls needed.

"They just need a good environment to take away some of the stress. The house needs to be more open, and designed for what the family needs."

Mr Craig is designing the house, and the Owens have worked with him on the design to ensure the house suits their needs.

"We're concentrating on building the house itself, but we're open to doing some landscaping too, if anyone is keen to help with that."

Finding a house which had everything they needed was "virtually impossible", Mr Owen said.

"Space is the biggest thing, really. With more space, the girls can have more independence. If everything is set up properly, then they can safely do things themselves."

The house design includes wider doorways so Charli and Meg can use their walking frames inside, cavity sliding doors, and handrails throughout.

Mr Craig said several businesses and individuals had donated building materials for the project. One Christchurch company was donating insulation for the house.

"It's amazing who has come forward to help already. It's pretty cool how many people have put their hands up and have said 'yes, I can help'."

He planned to do some of the foundation work before construction at Labour Weekend, which would involve crews of about 20 builders working shifts over three days.

Construction will take place at the Kaitangata Rugby Grounds from October 19 to 22, and the house will be transported to a section in the township owned by the Owens.

A smaller group would spend the following few weeks finishing off the house.

To help raise money to build the house, a concert and auction will be held in the Balclutha War Memorial Hall on September 1.

The event, hosted by comedian Steve Wrigley, will feature Kaitangata musicians Aaron Jury, Vickie Evans, and the band The Crescents.

While many items and prizes have been donated, the Craigs are still seeking larger items to be auctioned at the concert.

They hope to raise about $40,000 at the concert. Any money left over from the project will go towards landscaping or into a trust for Charli and Meg.