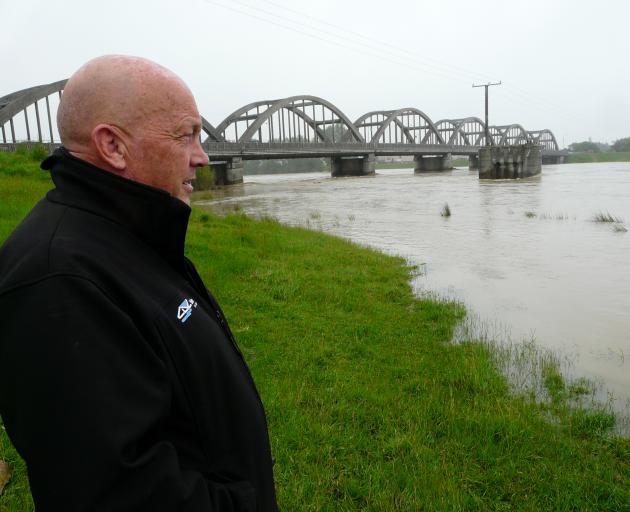 Four people in three separate incidents had to be rescued from their vehicles after ignoring road closure signs put in place because of widespread surface flooding across South and West Otago.

Clutha Mayor Bryan Cadogan appealed for common sense from drivers in the region, after it became apparent some were courting disaster.

''There's a reason why flood signage is up on many roads,'' Mr Cadogan said.

''Don't be a galoot and ignore it, and stay at home unless you absolutely need to get somewhere.''

Despite the warning, which was reissued less colourfully by police during the day, people continued to chance their arm.

Tapanui Chief Fire Officer Roger O'Leary vented his own frustration after two people had to be rescued from inundated cars near Kelso in West Otago in the morning.

''We've had two separate people think it's a good idea to ignore 'road closed' signage and drive themselves straight into floodwater.

''It's just a total waste of emergency service time when we've got a thousand things to attend to in this situation.''

In the first incident, a male driver dialled 111 before leaving his vehicle partially submerged and walking home, Mr O'Leary said.

''That means we had to get police involved and find him to check on his safety. It's just incredible how stupid some people are.''

In the second incident, a woman had ignored a closure sign and attempted to drive through floodwater, he said.

In a later incident between Balclutha and Clydevale, emergency services were called to rescue a driver and passenger from the roof of their vehicle after they tried to cross a flooded road.

''We ask that drivers remain patient, keep your speeds down on these roads, and obey all road closure signs.''

Mr Cadogan offered praise for those who had helped friends and neighbours during the emergency.

''We're aware there's considerable disruption for people right across the district, including a closure of Finegand [freezing works] for the day, but it's been pleasing to see the practical and common sense approach most have adopted.''

Detention for ‘one of the most controlling’ men judge had seen