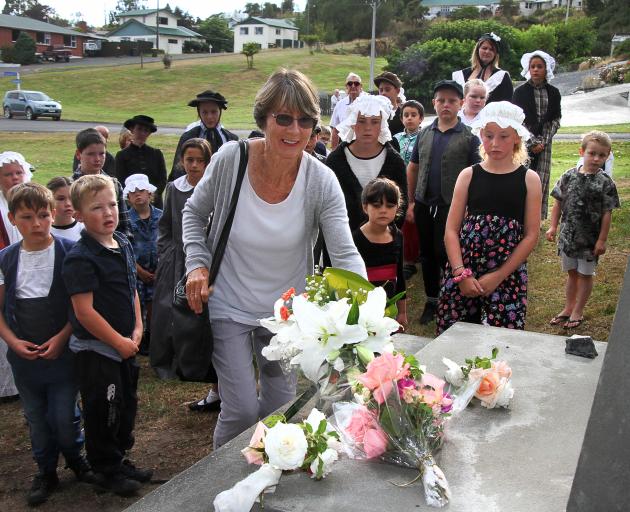 The great-granddaughter of William Parker Hall and great-great niece of James Hall, Jackie Stoff, a retired teacher of Kuri Bush, comes forward to lay a wreath at the memorial to the 34 miners killed in the 1879 Kaitangata mining disaster. PHOTO: JOHN COSGROVE
The bells tolled at exactly 9am in Kaitangata yesterday to signal the 140th anniversary of a disaster in the small South Otago township.

More than 100 schoolchildren from Kaitangata School and 40 adults gathered to walk 200m from the town skate park up to the old cemetery reserve, in Exmouth St, to commemorate the anniversary of the mining disaster of February 21, 1879, which devastated the local community.

The next morning on February 22, 1879, the Otago Daily Times carried the headline "Fearful mining catastrophe at Kaitangata".

The disaster is credited with beginning far-reaching changes in the health and safety practices for the mining industry.

Retired Kuri Bush teacher Jackie Stoff, whose great-grandfather William Hall and his brother James Hall were killed, said she had heard the walk was planned and had travelled from Dunedin to be part of the commemorations.

The Kaitangata schoolchildren who took part in the walk yesterday had been researching the disaster and the planned walk and wreath-laying ceremony was part of a two-week-long series of events titled "Blood on the Coal".

Thirty-four miners died, most by suffocation, including men and boys.

Later it would be learnt that mine manager William Hodge's brother Archibald had entered a disused section of the workings with a naked flame in hand, igniting an accumulation of highly flammable, methane-rich "firedamp" gases, and causing the disaster.