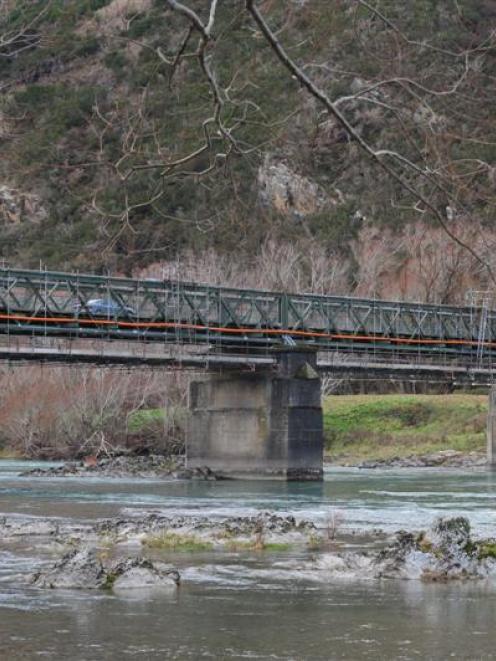 Waitaki deputy mayor Jim Hopkins questioned whether the bridge met minimum safety standards and was in danger of collapse, at a recent meeting of the Otago Regional Council's transport committee.

The NZTA has been spending money on the bridge as it seeks to extend the life of the 123-year-old structure. About $1.5 million was spent on maintenance during the period 2005-10.

A decision on replacing the bridge may be on the back-burner because of the possibility a hydro dam could be built in the area, flooding Beaumont.

Something needed to be done, Mr Hopkins told NZTA staff at the meeting.

"Are we are running a bridge which is so unsafe we have to make trucks stop first, because if they drove on to it at normal speed, it could fall down?"

A maintenance programme of about $215,000 was in place for the bridge last year and $180,000 was spent installing traffic lights at the bridge approaches in June 2010.

"How does the Government of a country justify such a situation given its commitment to safer roads and journeys?" Mr Hopkins asked.

He asked whether the bridge would collapse if trucks drove on to the structure at full speed, which he understood was the reason the lights were installed.

"Are they satisfied with some traffic lights to stop trucks because the bridge [could fail] if they drive on at full speed?"

NZTA southern director Jim Harland said the bridge was not in danger of falling down. The measures taken by NZTA were about "increasing the life of the structure and reducing risk".

"The real solution is to replace the bridge," he said.

"It is good money going bad after five years. After that then we will be spending exponentially more money than what it costs to maintain," he told Mr Hopkins.

Mr Duncan said the measures, which have included the installation of traffic lights to control the speed and entry of vehicles on to the bridge, addressed road safety issues and not structural concerns.

A new bridge had been earmarked for construction some time after 2015, he said. However, the NZTA was yet to commission any design plans for a new bridge.

Replacing the bridge might also be affected by a possible Clutha River hydro-electricity scheme, which was still being considered by Contact Energy, Mr Duncan said.

"Contact ... are still undecided." Mr Woodhead asked whether Contact might have to provide some compensation should the Beaumont Valley be flooded for hydro-electricity purposes after a bridge was built.