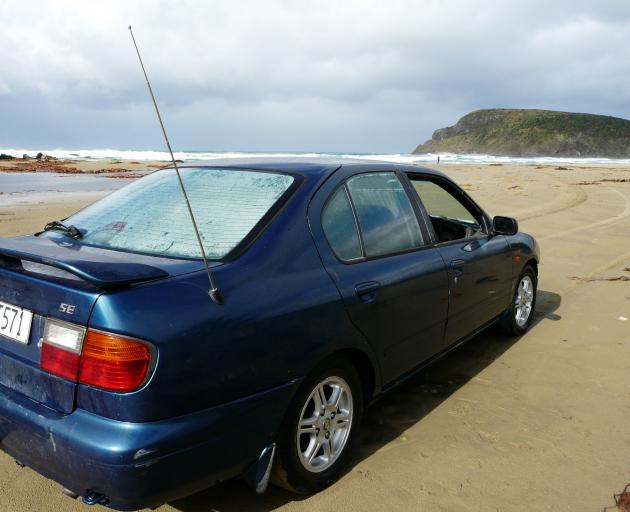 Sights like this car at Cannibal Bay near Owaka may become a thing of the past if a new council bylaw banning vehicles from several Clutha beaches is approved. PHOTO: RICHARD DAVISON
Vehicles could be banned from popular Catlins beaches from next year, depending on the outcome of public consultation beginning next Thursday.

The Clutha District Council met in Balclutha yesterday afternoon to approve the launch of consultation on a new Vehicles on Beaches bylaw, which could see a total ban for coastal beauty spots from Taieri Mouth to Tautuku.

The proposals are the result of a process begun in 2020, when environmental advocates and some residents brought the issue of vehicles disturbing wildlife on Catlins beaches to the attention of the council.

As matters stand, eight Clutha beaches would have "safe zones" put in place, effectively banning any vehicle — including ATVs and motorbikes — from accessing them.

Some exemptions would apply, for emergency services, boat access, and access to property, such as cribs, otherwise inaccessible by road.

All beaches in the district would be subject to other provisions under the proposed new bylaw.

Those include a speed limit of 30kmh; avoiding dunes except for access; driving in a "courteous, appropriate, safe, and responsible manner"; and respecting other beach users and wildlife.

During the build-up to consultation, some officials expressed concerns about a potential ban.

During a council committee meeting in September last year, Catlins ward councillor Dane Catherwood said many in the area were worried about the prospect of restrictions.

"Nobody who’s contacted me about this has said it’s a great idea. I think people are concerned it might stop fishermen launching boats, for example, and at the same time fail to prevent the problem it’s intended to solve.

"Those inclined to behave in harmful ways will do it, bylaw or no bylaw, unfortunately."

Yesterday councillors gave the go-ahead for consultation to begin.

The resulting bylaw, including any changes made during consultation, will come into force on January 1 next year.