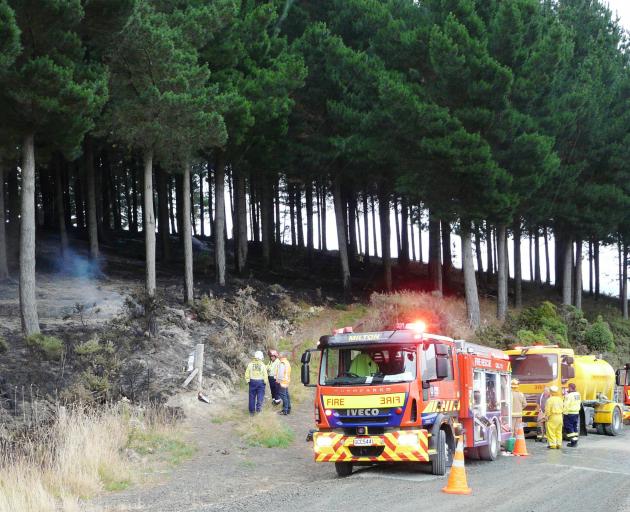 Firefighters were called to the incident on a mature Calder Stewart radiata pine block on Coal Gully Rd, near Milton, about 7.30am.

Brigades from Milton and Balclutha were first on the scene, and later joined by teams from Wakari, Waihola, and the Dunedin Command Unit.

Thanks to the quick action of the Clutha teams, the fire had been limited to the surface and an area of 300m by 400m (12ha), Dunedin Deputy Principal Fire Officer Jason Sarich said.

At the fire's peak, as many as 40 firefighters had been involved in quelling the flames, Mr Sarich said.

''Fortunately, the conditions and the admirable work of Balclutha and Milton first responders have combined to mean the trees haven't caught significantly, and a more serious incident has been averted. This is the second fire on this road recently, so our team will be investigating.''

He could not comment on whether the fire was suspicious, saying it was too early to determine a cause.

Asked whether known arsonists were in the district, he declined to comment.

''We're awaiting the initial report from Fenz, but we anticipate we'll be investigating.''

He said the police wished to hear from anyone who had seen persons or vehicles in the Coal Gully Rd area around the time of the fire.

''We want people to remain alert, but nobody should be alarmed at this stage.''