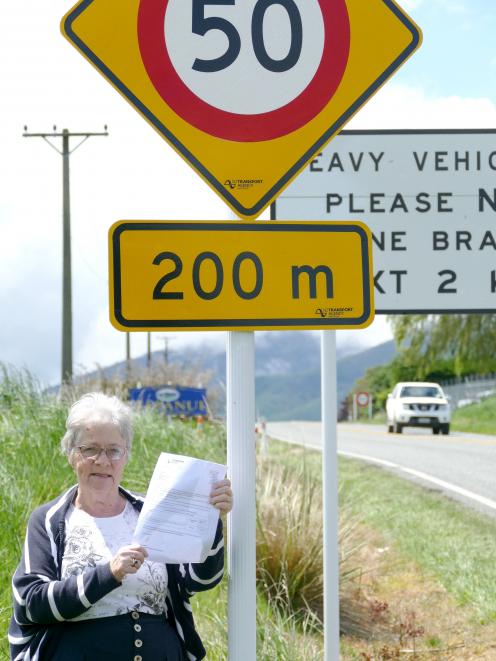 Town officials and residents said they were delighted to receive official notification from the NZ Transport Agency yesterday, that 50kmh speed advisory signs would be moved an additional 200m south on Tapanui’s State Highway 90 Gore exit, on December 4.

This would afford greater safety to homes and businesses located just over the brow of a blind summit at the town’s entrance, West Otago Community Board chairwoman Barbara Hanna said.

"We’re delighted. It’s been a long time in the making, but it lifts a big worry from local people’s shoulders that something terrible could happen on this stretch of road."

Due to the placement of the present signs, cars and trucks often did not begin slowing until they reached them, meaning they were still travelling at unsafe speeds as they passed business and domestic driveways located just past the brow.

A provisional measure using temporary signs 200m out had improved the situation, although some drivers were still not following the rules, Mrs Hanna said.

"It’s up to the drivers now to make sure they behave responsibly and respect the signs."

As many as seven new homes could soon be in place on a neighbouring subdivision, and adjoining business South West Autos also had twin exits at the location.

South West Autos co-owner Racheal Hines said she was "over the moon" to hear of the decision.

"We have school buses leaving the yard slowly in the morning, and customers coming in and out all day, so we’re hoping this will have a huge impact on their safety.

"It’s great that it will be happening before Christmas. It’s taken a while, but it just shows you should keep persisting if you believe something’s a serious issue."

The NZTA confirmed it had also approved a second proposal for a speed reduction in the Clutha district yesterday, on State Highway 1 to Balclutha’s south.

The change, also scheduled for December 4, will move the existing 80kmh zone on the highway an additional 450m south, just past the new Rosebank Industrial Park.

Although no crashes had occurred at the Tapanui site, between 2009 and 2018 there were six crashes at the Balclutha site, causing one serious injury and two minor injuries, he said.