Two vehicle fires in one afternoon 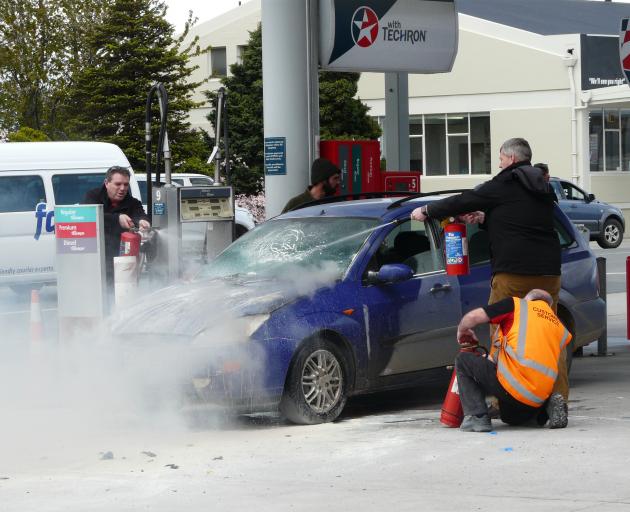 In the first incident, at Balclutha Caltex on James St, the engine compartment of a Ford Focus parked alongside a petrol pump began to emit smoke about 12.40pm.

While the occupants exited the vehicle and alerted Caltex staff, flames emerged.

An Otago Daily Times reporter passing the scene said staff and members of the public rushed to fetch fire
extinguishers, and worked together quickly to bring the blaze under control.

Battling clouds of white smoke and recurrent flare-ups from the vehicle's engine, firefighters at the scene said the quick action of bystanders had averted what might have become a more serious incident.

Several other members of the public stood nearby watching events unfold, during the garage's busy lunchtime period.

Two fire appliances arrived about 12.50pm and, with the help of Balclutha police, firefighters cordoned off the scene and fully extinguished the blaze, before removing the vehicle to a safe location nearby.

A second engine fire occurred about 1.50pm, in a Toyota Caldina on Charlotte St, Balclutha.

The occupants of the car said they were alerted to the problem when smoke began to obscure their windscreen. Shortly afterwards, the brakes failed and the driver pulled over.

A staff member from a nearby business alerted the fire service, which was quickly on the scene.

Both fires were extinguished without injury or further incident.

Balclutha fire station officer Stacey Verheul said although it was unusual to have two such incidents on the same day, engine fires were more prevalent in spring.

Although unconfirmed, it was possible both fires were caused by bird nests in the engine compartments, she said.

''Engine fires nowadays are relatively uncommon due to the safety of modern technology, but vehicles that haven't been used for a while can quickly become a home for nesting birds.

''Then when the engine gets hot, so does the nest.''

Investigations into the fires would continue.