By Richard Davison
0 Comments
Southern cyclists can look forward to a "classic" trail experience, as work begins on the Clutha Gold Trail extension on Monday.

The trail already runs for 73km from Lawrence to Roxburgh (also at grade 2), where it joins a further trail network extending into Central Otago.

Mr Paterson said the latest section had been made possible only through the generosity of local landowners.

"It’s pretty amazing the generosity of people we’ve asked for easements and other permissions, meaning we’ve been able to formulate a really classic trail route for riders through the Manuka Gorge here and beyond.

"Riders will be able to discover several interesting former rail tunnels from the Glenore to Roxburgh branch line, and the stunning Falla Burn viaduct, among other natural and man-made features and attractions." 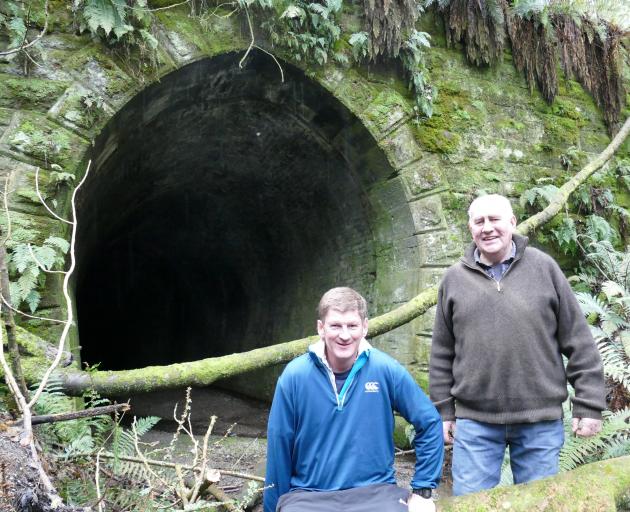 Clutha Gold Trail Charitable Trust chairman Murray Paterson (right) and trustee Symon Howard are delighted work on the trail's extension from Lawrence to Waihola will begin Monday, on the Round Hill tunnel section near Waitahuna. PHOTO: RICHARD DAVISON
Work would begin on Monday at the Round Hill tunnel — estimated to be about 150m in length — which opened with the Lawrence section of the branch line in 1877, and fell into disuse when the line closed in 1968.

Two teams of contractors would work in parallel to expedite the first project section, running about 20km from Waitahuna to Crichton Rd, near State Highway 1 outside Milton.

The trust was still finalising details and permissions for minor linking sections to complete the extension, which would run alongside the operational railway line from Milton to Waihola, he said.

The trust estimated eventual use of the extension could be as high as 15,000 riders a year, Mr Paterson said.

"Obviously, there are big opportunities for hospitality and accommodation providers with that many people coming through, although we expect locals to use it for recreation as well."

He said money from the Government’s Provincial Growth Fund had been instrumental in allowing the $9.6million project to proceed.