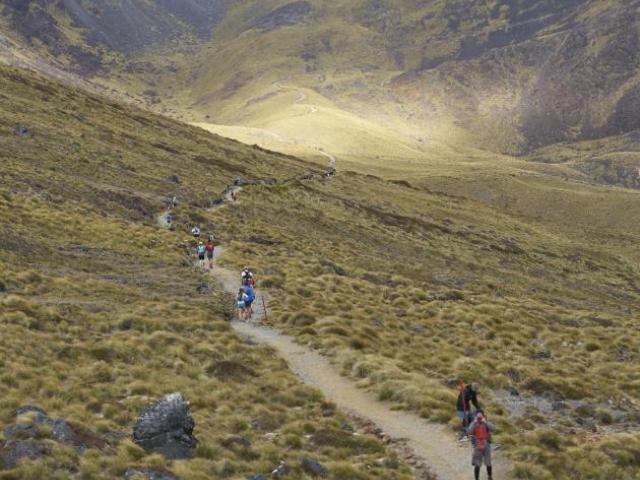 The Kepler Challenge. Photo: ODT files
Runners in Te Anau’s Kepler Challenge have had an extra hour in bed this morning, a reduction in the amount of climbing to be done and 1km knocked off the length of the course, thanks to forecast bad weather.

Rather than have 500 lightly clothed athletes spend two or three hours on the mountaintops in driving sleet and strong winds, organisers have changed the route.

So instead of reaching the top of the track at 1400m, runners will turn around at the Luxmore hut (1054m) and take a lower, alternative course.

Race director Steve Norris said yesterday he was expecting "a bit of a wild Fiordland morning" and the change had been made with the safety of runners and volunteers in mind.

"If anything happened, could we get a [helicopter] in there to get people out?"

It is the third time in 33 years an alternative course has been run, including last year when runners waded through waist-deep water.

"We won’t have that problem this year, but we do have the problem of severe weather on the top."

Mr Norris said 20 years ago, competitors were trampers who took up running and had experience with bad weather.

But now, runners were a "different breed".

"They haven’t come from a tramping background where they understand what alpine weather can be like."

This year’s race has 500 entries — 50 more than previously — with online places filling in just over two minutes.

The extra 50 entries are intended to help out Te Anau’s hospitality and tourism industry.

"Fifty runners means about another 120 people, which is like another 30 or 40 motel rooms [and] another 120 cups of coffee times three or four over the weekend ...