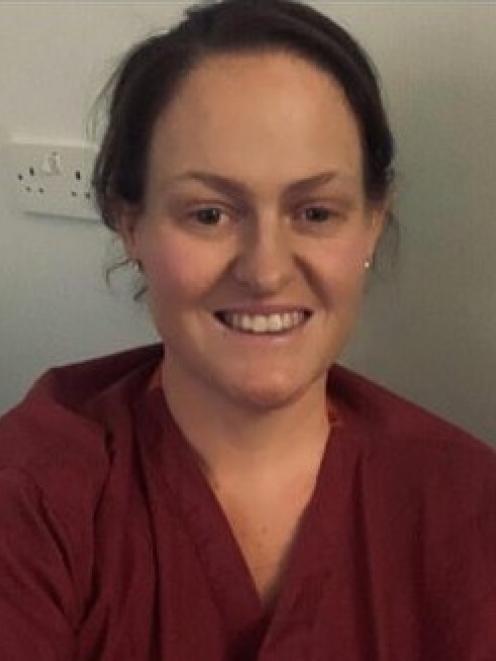 Jenny McGee. Photo: Supplied via NZ Herald
The proud family of an Invercargill-born nurse credited by British Prime Minister Boris Johnson for saving his life after he got Covid-19, says she was just doing her job - "to get people well and home again".

Sister Jenny McGee says she's "overwhelmed" by the international response and has been inundated with messages since being thanked by the British leader.

But the 35-year-old has more important things to do than concentrate on the accolades - she's back at work helping others battling the deadly virus.

Ms McGee grew up on a farm in Edendale, went to school in Invercargill and trained as a nurse in Dunedin.  She has been living and working in London for some time and works in the intensive care department at St Thomas' Hospital in the city.

Last night Mr Johnson,  who has been in hospital for a week being treating for Covid-19, thanked the National Health Service and its staff - but singled out two nurses who stood by his bedside for 48 hours "when things could have gone either way".

The 55-year-old said Jenny from Invercargill "to be exact", and Luis from Portugal, were the reason that "in the end, my body did start to get enough oxygen".

"So that is how I also know that across this country, 24 hours a day, for every second of every hour, there are hundreds of thousands of NHS staff who are acting with the same care and thought and precision as Jenny and Luis."

Mr Johnson was admitted into St Thomas's on April 5 and was transferred intensive care the following day. He was released this morning (Sunday UK time).

Ms McGee has declined interviews at this stage.

Ms McGee's parents know the care their daughter gave Johnson would be the same she would give anyone who was lying in the intensive care unit.

Her father, Mike, told the Otago Daily Times this morning that he and wife Caroline were extremely proud of his daughter who has worked at St Thomas' for the past eight years.

‘‘She would give the same level of care to whoever it is that’s in that bed needing care and that’s what we’re so proud of.

‘‘She says ‘my job is to get people well and get them back home again’ and she does her best.’’

Ms McGee had phoned at 5am today to tell her parents there had been media on her doorstep wanting to talk to her, however she was now back at the hospital working in the ICU on a night shift.

Her brother, Bobby McGee, spoke to The New Zealand Herald about her work today.

He said he and his parents were all stunned by Johnson's personal thanks and the international attention.

"We are all very proud of Jen, not just in the support she gave Boris - but what she has been doing helping everyday people," said Bobby McGee, who is currently overseas.

"We spoke to her this morning - evening in the UK - and she was about to head off to do another night shift. She just saw it as another day and kept just saying she is just doing her job.

"Whilst she is blown away by Boris' recognition, she is just really pleased to see the public recognition for the amazing work the NHS is doing - that made her really proud."

It is hard to find the words to express my debt to the NHS for saving my life.

The efforts of millions of people across this country to stay home are worth it. Together we will overcome this challenge, as we have overcome so many challenges in the past. #StayHomeSaveLives pic.twitter.com/HK7Ch8BMB5

Boris Johnson had been in the hospital for a week and spent three nights in the intensive care unit. He is the first world leader confirmed to have the virus.

His symptoms, including a cough and a fever, at first were described as mild, and he worked from home during the first few days of self-isolation. But he was admitted to St Thomas' on April 5 after his condition worsened.

He was transferred the following day to the intensive care unit, where he received oxygen but was not put onto a ventilator. Johnson spent three nights in the ICU before moving back to a regular hospital ward.

Mr Johnson's office said in a statement last night that he would continue his recovery at Chequers, the Prime Minister's country house.

"On the advice of his medical team, the PM will not be immediately returning to work. He wishes to thank everybody at St Thomas' for the brilliant care he has received."

His pregnant partner, Carrie Symonds, said in a series of tweets that she "cannot thank our magnificent NHS enough" and that she "will never, ever be able to repay you and I will never stop thanking you".

Ms Symonds admitted there "were times last week that were very dark indeed".

"My heart goes out to all those in similar situations, worried sick about their loved ones."

On Sunday (local time) the United Kingdom became the fourth European country to surpass 10,000 virus-related deaths. Britain has been in effective lockdown since March 23 and the government will extend the restrictions later this week.

While she was saving him how many people died because of his cruel policy decisions?

Well done! Please look after Mick Jagger too if he also gets sick and make sure that he takes his words back (if you know what I mean)