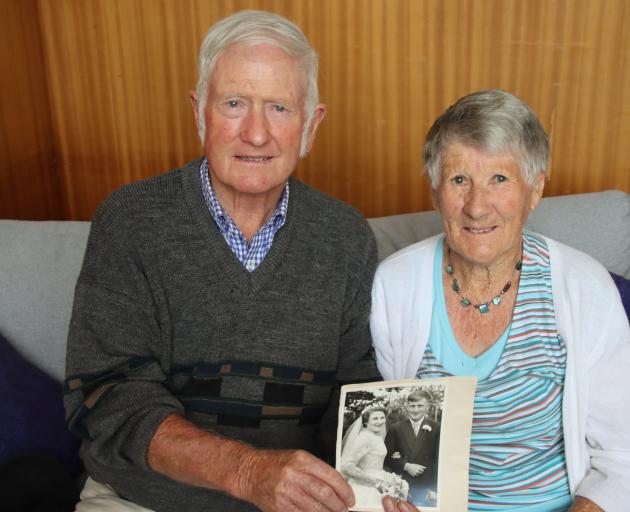 Balfour’s Marilyn and Alister Lee celebrated their 60th wedding anniversary yesterday. PHOTO: SANDY EGGLESTON
Falling could be the theme of Marilyn Vause and Alister Lee’s first outing together but were they really falling for each other that day?

Mr Lee (83) said the couple grew up in Dunedin.

"We lived within a couple of miles of each other."

While they were aware of each other from a distance, it was on a youth group ice skating trip to Central Otago their friendship began.

The day did not go so well.

"She fell over and hurt her head, got bit of a headache," her husband said.

It was on the bus trip back when Mr Lee, who was standing in the aisle talking to Mrs Lee’s friend who happened to be sitting beside her, lost his footing when the bus lurched travelling around a corner.

"You fell over where I was sitting," Mrs Lee said.

"It wasn’t the friend I was interested in — it was you," he replied.

When the bus arrived back in Dunedin, Mr Lee took his new friend home in his car.

"Dropped her off and she staggered off inside," Mr Lee recalled.

The couple were not sure whether they actually fell in love on the trip.

They courted for about a year and were married at the Roslyn Baptist Church, when she was 22 and he was 23.

The couple started married life in Lawrence before shifting to Timaru.

In 1975, Mr Lee decided he wanted a career change from being a mechanic, so they bought an apiary business in Balfour.

Working together was important in their marriage.

"You bring up your family in the same way," Mrs Lee added.

The couple did not argue much but had "discussions".

"You’ve got to be flexible if you’ve been married that long," he said.

It was also important to be truthful, she said.