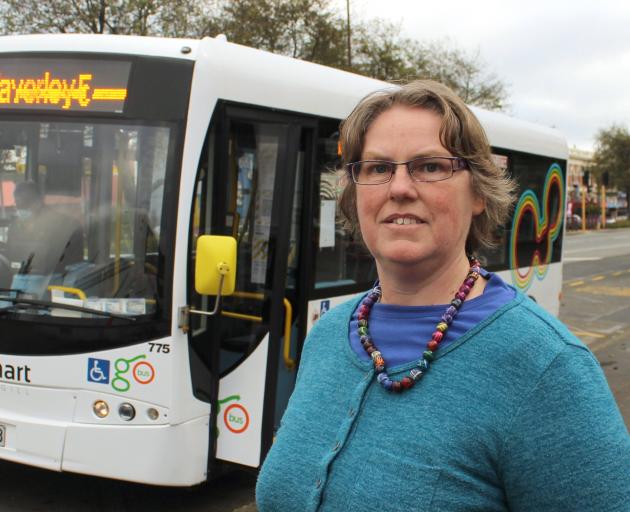 The newly changed bus service is upsetting some Invercargill bus users, including resident Karen Barnett. PHOTO: KAREN PASCO
An Invercargill woman who volunteers her time to help others is frustrated changes to the city’s bus timetable is hampering her work.

Southland Hospital shop volunteer Karen Barnett said she missed one day’s work and was an hour late for her shift another day because of the new timetable.

Ms Barnett, who lives in Waverley, has always had to catch two buses to get to her shift, changing at the town junction before catching the Clifton bus to the hospital.

Since the new bus timetable was introduced by the Invercargill City Council at the end of last month, the buses had been running late, therefore meaning she had missed her connection and having to wait up to an hour to catch the next one, Ms Barnett said.

A bus she caught this week had her arrive at 27 minutes past the hour, 10 minutes later than scheduled.

"They’ve got the wrong timings on the new routes," she said.

"They’re not allowing enough time between the transfers — because they’re only allowing three minutes [to get on the next bus]."

Bus drivers had been encouraging upset passengers to complain directly to the council, she said.

They had also told Ms Barnett to let them know when she was catching a connecting bus.

"This week the driver radioed through to the next bus driver to tell them there was a transfer but there was no reply."

Ms Barnett had been to the city council twice to complain to transport officer Nathan Gill, and although she came out both times feeling like she had been listened to, nothing had actually changed, she said.

"He told me to give it time, that it was all new and that it would get better," she said.

Also of concern to her was that some bus drivers were going faster than normal to try to make the change-overs in time.

Blind resident Victor West (82) said changes to bus routes meant where previously people could catch one bus to get to their destination, they were now having to catch two.

Mr West had been able to get a direct bus to Windsor, where he could go to the doctor, pharmacist and supermarket.

Now he had to get two buses there and two buses back on a journey which would be no more than 2km.

He said he had read and heard submissions in 2017 when the changes were first mooted by the council.

"The majority of oral submissions while I was there didn’t support it [the changes]," he said.

"The written submissions that I got didn’t support it either."

Previously, off-peak buses ran every 45 minutes, but now they were hourly which meant waiting around in the cold once jobs were completed, he said.

The council was unable to reply to questions before deadline.